You are here: Home / Archives for Bill Wiebold

Rain the last two weeks might be too late to be of any help to the state’s soybean and corn farmers. 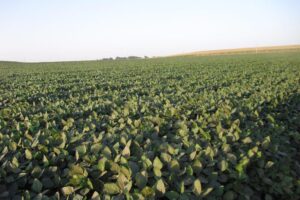 Just because soybean fields are green and don’t look dry like most cornfields this year, does not mean they are productive. (Photo courtesy, Karma Metzgar)

Some soybean farmers resisted cutting their crops for silage, hoping to salvage a bigger crop out of them. University of Missouri Agronomist Bill Wiebold says rains in the last couple of weeks could help maintain the pods that are there or make seeds a little larger, but that’s about it.

Corn plants, most of which died weeks ago, now run the additional risk of fungal infection as a result of rain. Wiebold says that makes harvesting what is left as soon as possible a priority.

“Even though the yield’s not very good, every bushel that we can bring in is income. What we’ve been saying is a timely harvest, even with a poor harvest in terms of yield … is still important.”

Wiebold says the harvest of most soybeans will begin in about three weeks.

Farmers with soybeans dying in the fields and livestock to feed have a difficult choice to make. 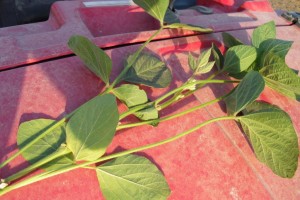 Soybeans from a field near St. Joseph planted May 20 have blooms but no pods. Pictures courtesy of Karma Metzgar, University of Missouri Extension.

Many Missouri producers who last year had a hay surplus sold it to counterparts in drought-stricken states. Now those same Missouri farmers are experiencing drought and have to decide whether to give soybeans more time to possibly produce, or cut them for forage.

University of Missouri soybean specialist Bill Wiebold says it’s a tough call because soybeans have a long window of potential because they flower over about 40 days, compared to 6 to 8 days for corn.

“It causes soybean to be a little bit better capable of handling at least short-term stresses, and then all that built-in capacity that soybean has produces lots more flowers than they really need.”

Wiebold says the window is closing, however, and the last round of consecutive 100-degree-plus days might have been too much. “On a soybean plant it goes from ‘it doesn’t look too bad’ to ‘the leaves are dry and the plant is dead’ pretty quickly, and it’s hard to know when to pull the trigger and when to make that decision.”

What’s been applied on those crops?

Soybeans do offer good forage, but University of Missouri forage specialist Rob Kallenbach says farmers have to consider whether they’ve used any applications on that crop before feeding it to livestock. There is a risk that chemical residue could show up in meat or milk from animals that grazed on it.

He says producers need to check labels or talk to suppliers to see what the dangers are.

“Corn plants will absorb nitrogen fertilizer through the roots and then they kinda store that as nitrate in the stem. When you feed that to an animal, particularly ruminants, that nitrate gets changed into nitrites that binds with the hemoglobin and oxygen can’t be transported around the body and you can kill them.”

Wiebold says he farmers are going to cut soybeans for feed, they should do it before leaves dry out. “Once they dry, they’re very fragile. They’ll break up, and that’s where all the nutrients are … you want to keep them on the plant.”

Kallenbach says whatever farmers do with drought-stricken crops, they must make sure insurance assessors have seen them first.

“You need to talk with your adjuster and your insurance company prior to harvesting that crop for silage or for hay. Otherwise, when the adjuster shows up and the crop’s gone, you’re going to be disappointed in what he says your insurance amount should be.”