You are here: Home / Archives for Belton

The two main gubernatorial candidates are focusing on rural Missouri again Friday, and during the final days of the campaign.

The governor tells Missourinet he feels confident about where the race is and that he’s on message. Parson also says that if he wins Tuesday, he’ll continue to focus on putting people first.

“I think what we seen what we did by taking the largest income tax cut in our state’s history, by creating 40,000 new jobs by focusing on workforce development and infrastructure,” Parson says, highlighting achievements of his term.

She campaigned Thursday in Columbia, before heading to southwest Missouri’s Marshfield and Springfield. During an interview with Missourinet outside her bus in Columbia, Galloway says rural voters tell her that Jefferson City is disconnected from what matters to them, in their communities.

“Rural hospitals are closing. Jobs are leaving the area,” Galloway says. “They’re concerned about funding for their schools, which are the center of those rural communities.”

The Missouri Hospital Association (MHA) says ten rural hospitals have closed in Missouri, since 2014. Click here to see the full map and years. To be clear, several of those closings happened when Governor Jay Nixon (D) was in office.

But several have also happened during the tenure of Governors Eric Greitens (R) and Parson.

While Parson and Galloway disagree on numerous policy issues, one thing they both have been doing during the campaign’s final stretch is campaign heavily in rural towns across the state.

Galloway says her top priority, if elected governor, will be implementation of Medicaid expansion.

“Making sure that not only folks have access to affordable health insurance, but also have access to health care, meaning we can keep our rural hospitals open and open clinics in parts of our state that desperately need it,” says Galloway.

In August, Missouri voters approved Medicaid expansion for residents between the ages of 19 and 64 with an income level at or below 133 percent of the federal poverty level. While the issue was defeated in 105 of Missouri’s 114 counties, Galloway notes it passed by six points statewide, and that hundreds of thousands of votes from rural residents were key to its passage.

Galloway also says Missouri needs a reset on COVID strategy, so people can get back to work.

During a campaign stop Tuesday at Emery Sapp and Sons in Columbia, Governor Parson emphasized his rural roots, and talked about growing up in southwest Missouri’s Wheatland. He also discussed saying the Pledge of Allegiance in school.

“I think what people are seeing right now with everything we’ve been through is experience does matter at a time like this, and I think that’s one of the things I have,” says Parson. “All the way from serving my country in the military, law enforcement, being a business owner.”

Parson says it’s important to take a balanced approach to combating COVID, and that it’s crucial to look at the state as a whole. He says businesses are opening back up, and children are back in school.

Both candidates are appealing to blue-collar voters.

Parson praised their work ethic during his speech at Emery Sapp and Sons, talking about the workers wearing coveralls in the back of the room. He noted he had done work like that. It drew applause from the audience.

Election day is Tuesday across Missouri.

Click here to listen to Governor Mike Parson speak to Missourinet’s Brian Hauswirth and other reporters at Columbia’s Emery Sapp and Sons on October 27, 2020: 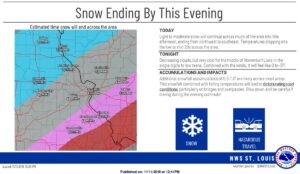 “It happens from time to time when you get these pretty strong intense bursts of snow,” Kurtz says. “And we have had two rounds here in the Kansas City metro, and two pretty strong lines have come through.”

I-49, which has re-opened, is a major route for truckers, and runs in Missouri from just south of Kansas City to southwest Missouri’s McDonald County.

Missouri Department of Transportation (MoDOT) spokeswoman Sally Oxenhandler tells Missourinet that southbound I-49 at 163rd Street in Cass County was closed for about 20 minutes today.

“I-49 was only closed for a little bit of time there due to some slick roads there,” says Kurtz. “And snow started to accumulate pretty fast. Once it started hitting the ground, it only took about 20 to 30 minutes for the road to start to get snow-covered.” 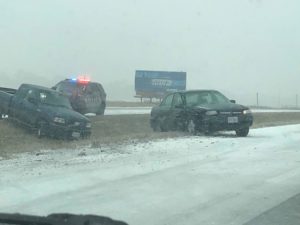 The National Weather Service is warning Missourians that the snow and falling temperatures will lead to deteriorating conditions on bridges and overpasses for your evening commute. Mr. Kurtz is urging motorists to slow down.

“My drive in was pretty slick as well, and you just have to give yourself plenty of time. And we can kind of be thrown off, especially when the day before we had highs in the 50’s,” Kurtz says.

Snow is expected to end in Jefferson City by 4 p.m. Monday and in southeast Missouri’s Farmington by 6 p.m. The NWS is urging motorists and anyone heading outside to dress in layers.