You are here: Home / Archives for Backstoppers

Floyd Warmann, 87, died this week, according to the obituary from Ortmann Funeral Home in Creve Couer.

Hearnes, who was from southeast Missouri’s Charleston, served ten years in the Missouri House before being elected Secretary of State in 1960. Warmann ran Hearnes’ 1964 gubernatorial campaign, and was his top assistant for eight years in Jefferson City.

Mr. Warmann later served on the St. Louis County Board of Police Commissioners. Memorials are suggested to the BackStoppers organization.

Missouri’s acting governor has ordered that U.S. and state flags at all government buildings in Missouri be flown at half-staff on Monday, to honor an officer who was killed last Sunday in the line of duty. 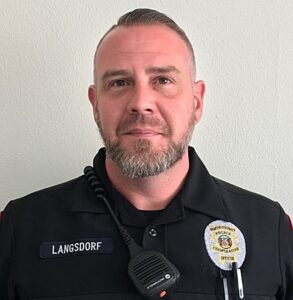 Acting Governor Mike Kehoe has issued the order, on behalf of Governor Mike Parson, who is out of the country. The flags will be flown at half-staff Monday to honor North County Police Cooperative Officer Michael Langsdorf, who was shot to death Sunday while responding to a bad check complaint in Wellston.

The 40-year-old Langsdorf had previously worked for the St. Louis Metropolitan Police Department for 17 years.

“For 17 years, Michael Langsdorf patrolled the streets of the St. Louis area, confronting violence and taking risks so others could be safer and the community could be stronger,” Acting Governor Mike Kehoe says. “Since his tragic, senseless killing, we’ve learned about the impact one individual officer can have over a career – from helping save a toddler from a burning building to mentoring and guiding younger officers. We are all indebted to Michael Langsdorf, and we will always remember the difference he made for the St. Louis region.”

The funeral mass for Officer Michael Vincent Langsdorf will be Monday morning at 10 at the Cathedral Basilica of St. Louis. Visitation is Sunday from noon to 6 p.m. at Hoffmeister Colonial Mortuary. The funeral home is on Chippewa in south St. Louis.

Donations are suggested to Backstoppers, a St. Louis-area organization that provides ongoing needed financial assistance and support to spouses and dependent children of police officers, firefighters, paramedics and EMT’s who die in the line of duty.

St. Louis County Prosecutor Wesley Bell has charged Bonette Meeks with first degree murder, resisting arrest and two other felonies, for Officer Langsdorf’s killing. Meeks, who is jailed without bond, is scheduled to appear in court in Clayton for an August 12 preliminary hearing.

A judge has ordered Meeks to be jailed without bond, describing him as a “threat to community given allegations and disregard for human life.”