You are here: Home / Archives for B- Corporations 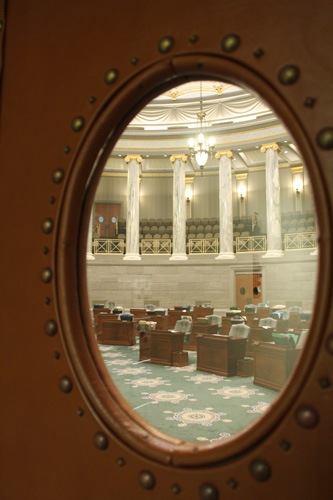 Long before the new Missouri Legislative session begins in January, lobbyists, lawmakers and activists begin to rally around their respective bills. Here are a few that may live to see another day (or live in another version) in Jefferson City in 2020.

“Stop the Grainbelt Express use of eminent domain” is not the official title of House Bill 1062 but that’s the idea of it. Frankford Rep. Jim Hansen wanted to curtail the Grain Belt Express (or any privately held company) from evoking eminent domain to get to the land it needs to run electrical transmission lines through the state. In this case, wind power is crossing from Kansas to the East Coast via approximately 780-mile overhead, direct current (DC) transmission line. After the Missouri Public Service Commission voted unanimously that the project is in the public interest, the state agriculture industry and many affected landowners went to lawmakers to stop the project, even holding a rally at the Capitol with Lt. Gov. Mike Kehoe.

The bill met resistance in the Senate as rural communities, businesses, and municipal utilities also reached out to their lawmakers, seeking the $12.8 million in savings for electricity offered by the Grain Belt Express in Missouri. Democrats and Republicans wanted to see struggling small towns get the extra cash. The company says the project is a $500 million investment. Wind energy proponents see this project as critical in reaching the East Coast with clean, cheaper energy.

Bill sponsor Rep. Jim Hansen says there is another plan in the works. But the bill in this version is not likely to come up again. Meanwhile, the Grain Belt Express owners say they “look forward to working directly with Missouri communities and landowners.” The criteria for granting the power of eminent domain could emerge again in some form.

Missouri continues to hold out as the only state in the U.S. without a statewide database to monitor controlled substance prescriptions, to the frustration of top Republican (and Democrat) leaders.  They see it as an effective tool in fighting the national opioid epidemic.  U.S Senator Roy Blunt agrees, calling for it in his speech to the General Assembly this spring.

Senate and House members in the small but strategic Conservative Caucus equate the database with an invasion of privacy that can also be exploited by hackers.

Pro Tem Schatz is disappointed lawmakers didn’t approve prescription drug monitoring program (PDMP) legislation this year. He’s already looking ahead to 2020. “But I will tell you that we will come back next year and I have three more years in this chamber (Missouri Senate). And I will work every year until we get that thing accomplished,” Schatz says.

Legalizing sports wagering in Missouri will continue to come up since the U.S. Supreme Court last year allowed sportsbooks across the country.  Most of the sportsbook bills introduced in the 2019 session allow Missouri-based casinos to host online betting online.

State Sen. Denny Hoskins, R-Warrensburg, sponsor of Senate Bill 44 has been working on this issue for three years and says there are still disagreements about casinos paying fees to sports leagues and requiring the use of sports league official data instead of a third-party chosen by casinos.  (See also SB 327, SB 222, HB 119)

Hoskins will refile the bill which uses part the state’s revenue (in the tens of millions) to improve public infrastructure around sports venues to improve the safety and fan experiences. However, he’s open to compromise to lure sports betting out of Nevada and into Missouri.

“We do have a lot of sports betting going on here already, but it’s not regulated and it’s not legal,” Hoskins says.

Film Tax Credits could bring in millions to Missouri, but they have not been used since 2012, when the incentive to the movie industry expired. The bill got some debate in both the House and Senate in 2019, as lawmakers lamented money lost to Georgia (no limit to tax credits) while on-demand film companies like Netflix are spending billions on new content. Read more here.

Tax incentives face a fight from the six-person Conservative Caucus in the state Senate fundamentally opposes rewarding private companies with taxpayer money.  Despite that, film credits were overshadowed by a much larger tax credit bill brought in by Governor Parson in the final weeks of the session in order to land a GM automotive manufacturing expansion in Wentzville.

Senate bill sponsor Denny Hoskins says he’ll try again. He’s a member of the Conservative Caucus, but says he’s tired of film projects (set in Missouri) going to other red states–bringing jobs, tourism and local spending in return for a cap of $5 million from the state.

B-Corporation designation is a special distinction for community-minded companies who want to attract like-minded investors (ex. Patagonia, Etsy). In order to be a “Benefit Corporation,” however, these businesses have to put their money where their mouth is, dedicating resources and money to a specific mission and creating financial transparency. There are no costs to the designation, but being a B-Corp protects company leadership from being sued for putting mission over profits or stockholders.

Missouri Right to Life added restrictive language to every B-corp bill this session, according to lawmakers on both sides. The group’s concerns are unclear and requests for comment from Missourinet have been unanswered.  Missouri’s Constitution restricts research tied to abortions.   The lead lawmaker for this bill is Republican Senator Lincoln Hough of Springfield. Democratic Senator Jill Schupp who supports the bill calls the MRL action a “poison pill.”

Companies are asking legislators, the Department of Economic Development and Governor Mike Parson to rally around the bill this coming session. One of those is Brewer Science in Rolla, which makes electronic components for computer chips.

“What it really does in terms of telling startups and high technology companies such as Brewer Science that you want to come to Missouri this is a great state to do business with. We’re a low-tax, low-regulation state, and we want to give you all the benefits more than 35 other states do being a Benefit Corporation, ” Brewer’s chief legal officer told Missourinet.  With the construction of the NextGen Precision Health facility for the University of Missouri System, high-tech life science research companies will want to come to this state, he contends.

“Kansas has this bill, Arkansas has this bill, Illinois has benefit corporation legislation. This is not something that we want to be out of, particularly where there’s no negatives: nobody ever has said anything negative, that this wasn’t a good bill and positive for Missouri. The only issue was the opposition from one interest group,” Gerson said.