You are here: Home / Archives for audit

The Missouri State Auditor has released an audit of the State Public Defender System that raises questions about how caseloads are calculated.  The heads of the associations for the state’s prosecutors and public defenders debate what that means for the idea that there is a caseload crisis.

In a news release, the Auditor says the system is “unable to accurately determine the resources needed to manage caseloads.”

The Missouri Association of Prosecuting Attorneys says the audit “shatters” the claim that there is a growing crisis of caseload size for the state’s public defenders.

President Eric Zahnd says the audit “reveals that that claim is really simply a myth that has been manufactured by misleading caseload statistics.”

Public Defender System Director Cat Kelly says regardless of how caseloads are calculated, there is no question that there is a caseload issue.

“The question is not, ‘Do we have a problem,’ it’s, ‘Where exactly, precisely should the line be drawn for us to say we can take this many and no more,'” she says “That’s what the debate is over, is where the line is drawn. I would contend that we are so far under that you could draw the line almost anywhere and we would be better off than where we are now.”

Kelly says the audit findings that the caseload protocol need to be improved are not new and says her office is already working to develop a new system not based on national caseload standards. She says an expert that worked with her office, Norman Lefstein, a law professor and dean emeritus at Indiana University, says an upated protocol could reveal a caseload problem that is greater than thought now.

“In his opinion, the protocol that we’re using now … its deficiency is that it has us taking on too many cases, not too few,” Kelly says.

Zahnd says the audit shows public defenders have no basis to defend turning away new clients. Kelly says that isn’t going to happen any time soon, “because the number of cases they have isn’t changing. The caseload is not changing … this is an argument over what is the best measurement of the problem. That doesn’t change the fact that the problem exists.”

Read the audit summary or the full report (pdf).

An audit that began with the investigation into Mamtek says the Department of Economic Development (DED) has taken some steps to improve its due diligence procedures, but could take more.

The Department’s Division of Business and Community Services is responsible for due diligence and reviewed Mamtek in the spring of 2010. Mamtek was offered $17.2 million in incentives and Moberly issued $39 million in bonds to finance a sugar refinery. The project failed in September 2011.

Schweich notes the Department already updated its due diligence procedures in February 2011 and he says the improvements were significant. He says there are still some things that aren’t being done that should be.

“One area that’s of particular interest to me coming from the private sector is whenever due diligence is done in the private sector, especially for a startup company, you don’t just look at the entity because it’s new. You go to the principals … the people. The CEO, the principal shareholders, whoever it is that’s really running the show and you look and see what’s their criminal history, what’s their financial history, and determine whether they’ve had failed projects in the past. So those are a few holes in the new procedures that we think could be tightened up.”

Specific to the Mamtek project, the audit says state and local officials could have done a better job evaluating the claims made by the company, such as the existence of a plant in China and the existence of company equity or ability to raise it.

Schweich says prior to February 2011, the agency wasn’t following its own procedures. He says now they are following their own updated procedures, and his office has recommended more steps that he is confident will be implemented.

He isn’t satisfied with the Department’s response to the audit, however.

Read the audit summary and the full report (pdf).

DED points out, as it has in the past, that no incentives were ever awarded to Mamtek because it never met job creation and investment requirements. Schweich says that’s not enough.

“Taken to its extreme, then why do any due diligence? Why not just give everybody tax credits and wait until the jobs materialize. The fact of the matter is (DED is) more than just a switch that turns on and off tax credits. They have expertise in that department. They are supposed to look into the viability of projects before they award even contingent tax credits.

“People rely on them. Maybe not legally … I’m not going to get into the legalities of it. I don’t know if Moberly was legally allowed to rely on BCS or not, but a small city which doesn’t have a whole room full of financial analysts and experts and tax credit experts sees that DED said, ‘Yeah, we think this is a good project,’ and even if they’re not legally allowed to rely on it, as a factual matter they’re going to.”

The audit also looked into the “stacking” of economic incentives:  when one project claims multiple incentives for the same work. It was calculated the state issued tax credits totaling more than $134 million to project costs claimed under more than one program between fiscal years 2000 and 2011. For every $1 of project costs, a developer could be issued up to $3.27 in federal and state tax credits.

Another finding was that the Governor’s Office in fiscal years 2010 and 2011 paid more than $149,000 for about 160 flights for the Governor’s Office, circumventing the legislative appropriations process. Many of those flights were for media appearances by the Governor promoting economic development incentive awards and projects that were predicted to create jobs. 22 flights costing more than $6,000 are reported to have had no clear benefit to DED or BCS.

A DED spokesperson declined to speak to Missourinet about the audit, referring to the Department’s response found in the report. An e-mail to the Governor’s office seeking a response was not answered.

Auditor Tom Schweich’s office has released a report that says the office of Governor Jay Nixon made its finances look better by shifting expenses to other state agencies. 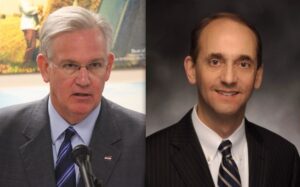 The audit says between January 2009 and June 2011, about $1.7 million dollars of the Governor’s office’s expenses were charged to other state agencies. That kept the Governor’s office and mansion from exceeding its appropriation in the state budget for each of the 3 years in the audit.

About $770,000 in salaries for several Governor’s office employees were paid wholly or in part by fourteen state agencies.

The report says during the 30 months covered, Governor’s office employees flew 334 days on state planes at a cost of $565,000. 96 percent of that cost was paid for by various state agencies, who also paid for another $37,000 in travel expenses and $406,000 in various other operating expenses. Schweich says that has been noted in earlier audits by himself and his predecessor, Susan Montee.

The audit says 19 out-of-state flights on state planes cost about $92,800, and says the Governor’s office does not check to see if commercial flights would be cheaper.  It also says most lodging expenses, especially for out-of-state lodging, lacked documentation explaining why costs were higher than the auditor’s staff thought necessary.

The report ranks the performance of the Governor’s office as “Fair” on the Auditor’s rating scale.  Schweich says that means he will do a follow-up audit in 6 months or more.

See a summary of the audit and the full audit (pdf).

To the findings regarding the charging of Governor’s office expenses to other agencies, the response was, “The office accounts for its operational costs in a manner that properly reflects the nature of the work it performs.”

To the findings regarding travel expenses, Nixon’s office responds, “The office follows state travel policy. On occasion, circumstances require some deviations from the policy but efforts to ensure the most cost-effective means are implemented. The office will ensure that such instances are appropriately handled. As to the extended lodging stay, that arrangement was based on particular circumstances surrounding a particular work assignment. The office does not foresee those circumstances arising again, but should they arise, will again ensure that the arrangement is reasonable and cost-effective.”

Schweich says he doesn’t want the audit to be perceived as political because of its timing. Its release comes nine weeks before the General Election in which Nixon is seeking reelection. Schweich is a Republican, Nixon is a Democrat. The Auditor says, “It’s very important to me that this office not be political.”

Schweich says his office tried to release this audit in June, but ran into two problems. “One was our auditor-in-charge before that time was in a serious traffic accident and we had to delay for a few weeks because of that … we also had a several week delay trying to get access to the (Governor’s) mansion to do the inventory and that delayed us by another month or so.”

Still, the state Republican Party has seized on the findings. Executive Director Lloyd Smith accuses Nixon of enjoying “the perks of being governor, wasting money on a taxpayer-funded plane, nice hotels and fancy meals.”

The State Democratic Party has not yet released a statement on the audit.