You are here: Home / Archives for Arnold

The top three Republican leaders in Missouri’s GOP-controlled House say they intend to simplify the process during the special session on violent crime, with single-subject bills. 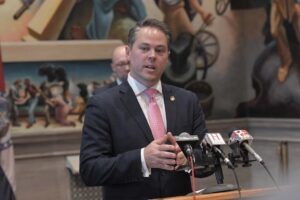 All Missouri House committee hearings originally scheduled for Wednesday and Thursday have been canceled, and the full House isn’t scheduled to return to Jefferson City until Monday August 24.

“In an effort to protect the integrity of the lawmaking process, and to ensure these important issues are thoroughly vetted, we intend to simplify the process with single-subject bills so we can focus on the merits of each bill individually to produce legislation that makes our streets and neighborhoods safer. Given the fact the governor expanded the call as one of our committees (the House Judiciary Committee) was considering the bill he originally proposed, we think it’s important to take a step back and give additional thought and attention to each part of the plan. This will provide a more deliberative process that will allow us to craft the kind of policy that will better protect Missourians from the scourge of violent crime,” the statement from House Speaker Elijah Haahr, R-Springfield, House Speaker Pro Tem John Wiemann, R-O’Fallon and Majority Leader Rob Vescovo, R-Arnold, reads.

The committee hearing that Haahr, Wiemann and Vescovo referenced took place Monday afternoon. Late Monday afternoon, Governor Mike Parson (R) expanded his special session call on violent crime, to include a provision to help with what he calls the growing backlog of murder cases in St. Louis.

The governor wants Missouri lawmakers to allow the state attorney general’s office to take on some murder cases that haven’t been prosecuted yet by St. Louis Circuit Attorney Kim Gardner (D). The governor emphasizes that this isn’t about taking away authority, and that it’s about fighting violent crime. Governor Parson says there have been 161 murders in St. Louis City this year, and that charges have been filed in only 33 cases.

“This allows the governor and his cronies to make a mockery of judicial checks and balances and demolishes any notion of a free and independent judicial system,” Gardner’s statement reads, in part.

The Missouri Senate approved the crime bill last week, by a bipartisan 27-3 vote.

Speaker Haahr tells Missourinet that he spoke by phone with Senate Majority Leader Caleb Rowden, R-Columbia, earlier today, before the Haahr announcement. Rowden told Haahr that he would speak to Senate President Pro Tem Dave Schatz, R-Sullivan, to fill him in.

The governor has emphasized that the special session is about violent crime.

Witness protection and eliminating the residency requirement for St. Louis Police officers are top priorities for the governor.

A key proposal in the governor’s January State of the State Address was $1 million in funding for witness protection. Despite bipartisan support in both the Missouri Senate and House, the measure did not pass this year.

Other Democrats, including State Rep. Ashley Bland Manlove, D-Kansas City, have called on the governor to address the root causes of crime, such as poverty.

The Missouri Legislature’s bipartisan St. Louis delegation has started a campaign to buy each St. Louis area nurse a gift card to a local restaurant, during the COVID-19 pandemic. 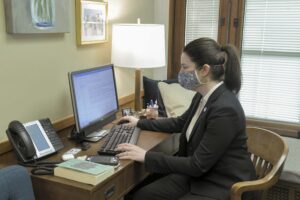 State Rep. Mary Elizabeth Coleman, R-Arnold, waits for her turn to vote on a $6.2 billion supplemental budget on April 8, 2020 in Jefferson City (photo courtesy of Tim Bommel at House Communications)

State Rep. Mary Elizabeth Coleman, R-Arnold, a delegation co-secretary, says the aim is to provide each nurse with a $50 gift card.

“The nurses on the front lines of coronavirus are our true superheroes,” Coleman says. “And we love our local restaurants and want them to survive the crisis too, and this is an effort to combine both.”

Coleman says there are about 5,600 nurses in active service in the St. Louis region. The St. Louis-area delegation’s fundraising goal is $280,000.

“Working with Mercy and BJC, with St. Luke’s and the SSM System, and so doing everything that we can to try to make sure that those who are on the front lines are able to receive the service,” says Coleman.

Coleman says 100 percent of donations will be used for gift cards, adding that lawmakers’ campaigns in both parties will handle administrative expenses.

She emphasizes that this is a bipartisan effort. State Reps. Ian Mackey, D-St. Louis, and Tracy McCreery, D-Olivette, are also leading the effort.

“As we all work to provide support for our neighbors during this difficult time, we’ve decided as friends and colleagues to join together and support those risking their lives, and the health of their families, to keep the rest of us safe,” Representative Mackey says.

State health officials announced Monday afternoon that there are now 4,388 confirmed coronavirus cases in Missouri, along with 114 deaths.