You are here: Home / Archives for Andrew Koenig

11 of the so-called “flimsy 15” stood with House Republican Leaders in an apparent show of caucus solidarity ahead of debate, and likely a vote on, Senate tax cut legislation this afternoon.

The House has taken up Senator Will Kraus’ (R-Lee’s Summit) legislation, SB 509, for possible passage to Governor Jay Nixon (D).  It would cut income taxes by one-half percent over several years beginning in 2017. The “flimsy 15” was what a pro-business lobbying group called 15 Republicans who voted with Democrats last year to veto a proposed income tax cut.

One of the most vocal opponents of last year’s bill was Representative Nate Walker (R-Kirksville), who called that legislation “flawed” and said he had to do what was right for his constituents. Walker says he was not coerced to stand with his caucus’ leadership today.

“It was my choice to be there and I support [Kraus’] bill,” Walker tells Missourinet.

He says the lawmakers among that 15, 14 of which are still in the House, met after the veto session and talked to House Republican leadership about their concerns.

“I think this is a good step and I think we need to try this,” Walker says, “and I think the economy will benefit from it.”

“I know why they called us,” says Representative Mike Thomson (R-Maryville), another of the 15. “But we’re a part of the caucus. We always vote our district and our feelings.”

Thomson asks why similar attention hasn’t been paid to Republicans who voted against Right to Work last week in the House. “I don’t know why we were singled out on this to be quite honest.” 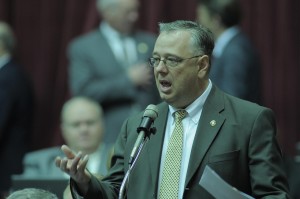 The bill sponsored by Representative T.J. Berry (R-Kearney) would cut corporate income taxes in half and allow half of business income reported on personal taxes to be exempted. Legislative researchers estimate the bill would cost the state up to $347-million annually.

“What House Bill 1253 is about,” Berry tells colleagues, “is incentivizing the creators so that we grow, and when they grow I guarantee you everyone else gets an opportunity also.” 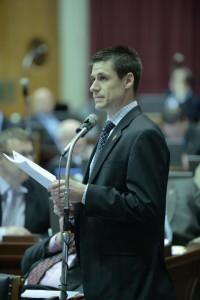 The other bill, sponsored by Representative Andrew Koenig (R-Manchester), would include the exemption for business profits reported as personal income and would cut individual income tax rates along with an exemption for lower-income Missourians. General revenue would have to grow by $100-million to $150-million in order for the cuts to take effect. Legislative projections are that the bill could cost the state up to $703-million by 2021.

“This is a reasoned approach and it will make our state more competitive,” said Koenig.

Every House Democrat present for both votes voted against the proposals.

“We had testimony in that committee that said Missouri was the third best state in the nation for corporate income tax. I’ve also heard seventh best. In other words, we already have a pretty good tax rate for corporations in this state.”

McNeil says legislators shouldn’t be pushing tax cuts with other funding needs, such as in mental health, drug rehabilitation centers and education.

She tells lawmakers the foundation formula for K-12 education funding is, “still $550-million under-funded from what, statutorily, we were to be.”

Both bills received 106 votes, well above the 82 required to pass in the House but just shy of the 109 that would be needed to override a gubernatorial veto. Governor Jay Nixon (D) vetoed a tax cut bill last that came down to a close, failed override attempt in the veto session, when 15 Republicans sided with Democrats in voting to sustain that veto.

Governor Nixon issued a statement denouncing the bills as, “fiscally irresponsible experiments that would funnel nearly a billion dollars out of our classrooms and other priorities.”

Both bills have been sent to the Senate.

The House has passed its version of legislation Republicans hope will level the playing field for Missouri among neighboring states. The proposal would cut income taxes for individuals and businesses will increasing the state sales tax.

Estimates from legislative researchers say the plan would eventually cut state revenue by $438 million annually. The changes wouldn’t kick in unless state revenue collections grow by at least $100 million year-to-year.

Representative Judy Morgan (D-Kansas City) and other Democrats say the bill will hurt the poor by shifting the tax burden.

“The reduction of the personal and corporate and business income tax, increase of the sales tax, guess who’s going to benefit from that. Not the people that make less than $33,000 a year. They will pay more in taxes because of the sales taxes and the people who will benefit will be millionaires.”

The House handler of the bill, Representative Andrew Koenig (R-Manchester) says the claims the bill will hurt the poor are “false” and “scare tactics.”

“In this bill there’s a $2000 deduction on income tax. We have a sales tax code that is laced with exemptions on the basic necessities of life … on food, gasoline, mortgage, rent, etcetera.”

The plan would cut the top personal income tax rate by two-thirds of a percent over five years. The corporate income tax would be gradually reduced by three-quarters of a percent, while a new 50 percent deduction would be phased in for business income reported on owners’ individual tax returns.

Personal deductions on individual income taxes for those with incomes under $20,000 annually would nearly double and the first $25,000 of corporate income from taxation would be exempted.

The sales tax would be gradually increased by three-fifths of a cent to pay for roads and education. The plan would set aside part of that increase to pay to replace the Missouri State Mental Hospital in Fulton. An amendment added on the House floor would also send part of the increase in sales revenue to the state’s schools.

The House version of the plan includes tax amnesty language that its budget writers and Governor Jay Nixon assume the passage of to balance their budget proposals.

The package passed the House 90-68, well short of the support needed to overturn a veto by the Governor who has opposed an earlier version of the bill. 19 Republicans voted with Democrats against it.

It goes back to the Senate.