The Missouri House Speaker is asking a fellow GOP House member to resign her seat, after she was indicted by a federal grand jury in Springfield for an alleged stem cell fraud scheme. The indictment was unsealed and made public on Monday. 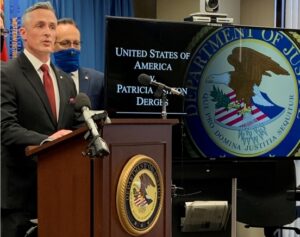 “After speaking with her and with the caucus, I am asking her to resign her seat with the House. The legal process will ultimately determine her guilt or innocence, but this is clearly a time for her to spend with her family as she focuses on her legal issues, and for the people of the 140th district (in southwest Missouri’s Christian County) to move forward with selecting a replacement who can effectively advocate for their interests,” Speaker Vescovo says, in a written statement.

As for Representative Derges, she remains in the Missouri House. Missourinet contacted her office for a response to Speaker Vescovo’s statement, and she hadn’t responded by this posting.

“This defendant abused her privileged position to enrich herself through deception,” U.S. Attorney Garrison told reporters on Monday. He also notes the indictment alleges she lied to her patients and to federal agents.

Federal prosecutors say the investigation started “as a result of false or misleading statements” made by Derges in April 2020 to a Springfield television station, about her potential use of stem cells to treat COVID-19.

The 63-year-old Derges was elected to the House in November. Garrison says she operates three Ozark Valley Medical Clinic locations in Springfield, Ozark and Branson.