You are here: Home / Archives for air flow systems

The lieutenant governor says the Missouri Veterans Commission (MVC) has released an initial report about the increasing number of COVID deaths in Missouri veterans homes, since September. 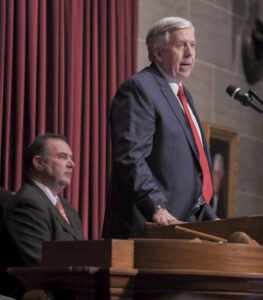 Lieutenant Governor Mike Kehoe (R) tells Missourinet that the initial report was issued a few days ago, and that some of the MVC’s recommendations are financial.

The MVC says 87 veterans living in state veterans homes have died from COVID, since September 1. That includes 12 deaths in the past 12 days at the home in northwest Missouri’s Cameron.

“They’ve (MVC) come up with a list of some short-term things we can implement immediately, and I know the (Veterans) Commission and the Veterans administration is working on that as we speak,” says Kehoe.

Lt. Governor Kehoe says the top priority for both he and the governor is protecting veterans living in state veterans homes. Kehoe emphasizes that the state’s veterans homes suffer some of the same challenges that other long-term care facilities do.

“It’s a vulnerable population,” Kehoe says. “You have employees and vendors in those homes that actually go out and maybe have another job, or go out to their families and could contract the virus and bring it back in.”

Kehoe says the MVC is working to implement procedures to stop any leaks like that. The state Department of Health and Senior Services (DHSS) says 75 percent of Missouri’s COVID deaths happen in nursing homes.

MVC says Cape Girardeau’s state veterans home has had the highest number of deaths since September, with 29. Cameron is second with 22. There have been 19 deaths at the St. James facility, nine at Mount Vernon, seven in Warrensburg and one in Mexico.

MVC spokesman Jamie Melchert says all of MVC’s veterans homes are following best practices for fighting COVID, as prescribed by the CDC and the state Department of Health and Senior Services (DHSS). He says that includes daily testing, using PCR and antigen testing. It also includes proper use of personal protective equipment (PPE), cleaning and disinfecting and enhanced training in those areas.

Click here to listen to Brian Hauswirth’s full interview with Missouri Lieutenant Governor Mike Kehoe, which was recorded on November 3, 2020 in Jefferson City: