You are here: Home / Archives for abortion services and human cloning

Legislation that would create a prescription drug monitoring program (PDMP) is expected to receive final approval from the Missouri Senate in Jefferson City on Tuesday. 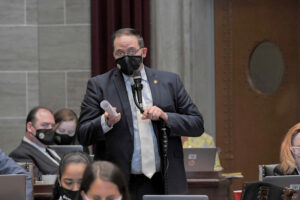 “49 states currently have a PDMP, and actually it just provides a layer of protection against drug and dependency and dangerous drug interactions,” Schatz tells KTUI.

A PDMP is an electronic database that collects data on controlled substance prescriptions within a state. Missouri is the only state in the nation without a PDMP.

Pro Tem Schatz also says the state operating budget will get a lot of attention in his chamber during the next five weeks. The House has approved a $34.1 billion budget, that does not include funding for Medicaid expansion. The budget now heads to the Senate.

“The governor had made recommendations. The House has made their modifications to it and now it’s our turn to work through the things that we think are priorities in funding in this state,” says Schatz.

The state Constitution requires Missouri lawmakers to approve a balanced budget, by early May. 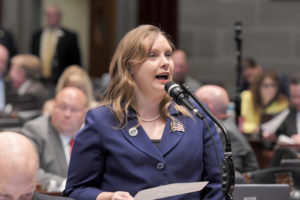 Across the Capitol Rotunda in the Missouri House, the Budget Committee meets Tuesday afternoon at 12:30 to hear testimony from Committee Chairman Cody Smith (R-Carthage) about his budget proposal to use Medicaid expansion funding for other programs.

Medicaid is formally known as MO HealthNet, and it’s a federal and state program that assists with medical costs for residents with limited incomes. 53 percent of Missouri voters approved Medicaid expansion in August, although it failed in 105 of the state’s 114 counties. Rural House members from those districts led the opposition to Medicaid expansion last week. Amendment Two supporters say the measure expands Medicaid for residents between the ages of 19 and 64 with an income level at or below 133 percent of the federal poverty level.

Chairman Smith says Medicaid expansion would help able bodied adults, many who choose not to work. He’s filed a bill to use the $1.9 billion to instead support seniors in nursing homes, to provide care for the developmentally disabled and to expand mental health programs. It would also increase k-12 school transportation funding. That proposal will be outlined on Tuesday.

Meantime, the Missouri House Emerging Issues Committee meets Tuesday evening at 5, to hear a foster care proposal from State Rep. Robert Sauls (D-Independence). House Bill 1335 would prevent children from being aged out of foster care during a pandemic.

“During uncertain and difficult times, our most vulnerable children shouldn’t have to worry about homelessness,” Representative Sauls tells Missourinet. “That’s why I sponsored HB 1335. I want to make sure that during a moment of crisis, the children of Missouri have the stability that they need.”

Foster care continues to be a bipartisan issue at the Missouri Capitol. It’s also a top priority for House Speaker Rob Vescovo (R-Arnold).

The human cloning issue will also come up this week in a House committee. The Children and Families Committee will hear testimony on Wednesday morning from State Rep. Sara Walsh (R-Ashland), which would prohibit public expenditure of public funds for research projects involving abortion services and human cloning.