You are here: Home / Archives for 2020 Democratic Convention

In previous years, party presidential convention-goers would be arriving home across the nation, laden down with candidate swag, tired, yet inspired from the previous week’s events.

This week, multi-location broadcasts, zoom meetings, and highly-produced video packages allowed most delegates and party leaders to sit back and enjoy the show.

With the delegation’s hotel being two hours away at a Chicago airport, there was no travel and “wait-in-line’ time for events.

This is far more accessible than past conventions,” said Andrew Storey, the Missouri Democratic Party’s communications and delegate director. 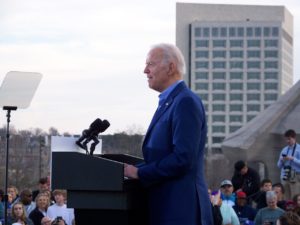 Biden supporters got to see their candidate in person in Kansas City in March of 2020, before the COVID-19 outbreak. (photo: Trey Byrd)

It’s also far less expensive than past conventions. Delegates have had to pay for their own travel, hiked hotel rates, and much of the food costs, amounting to thousands of dollars at the end of the week.

But delegates are missing out on the perks of being in-person: meeting counterparts from across the nation, shaking hands with the candidates, and previewing up-and-coming party stars at daily breakfast gatherings.

Delegate Ashley Bland Manlove, a state lawmaker from Kansas City, told Missourinet she was “hurt that it’s all virtual.”

“I was really looking forward to networking and getting to know other legislators,” Manlove said.

“You can’t really let ten thousand people on a Zoom call have a conversation. So it’s more of sitting in on leaders talking and submitting questions,” observed Chimene Schwach, a Biden delegate from Boone County.

Schwach, who identifies herself as a “mother of boys,” says she is still proud to have been a delegate.

“And that they see that their mother, who is a mixed-race woman, can get-up and have a seat at the table and be heard and be listened to without being called names — and I can keep it civil,” she told Missourinet.

Civility from party leaders and the Biden camp was an important takeaway for Bernie delegate Robert Cesario from Rolla. In 2016, there were disagreements and tension between the Sanders and Clinton camps as they crowded together on the convention floor and met behind closed doors.

“I think the Biden campaign has done a much better job of welcoming the Bernie delegates and the whole Bernie campaign and has made a real serious effort at trying to help produce a unified party,” said Cesario. “We’re somewhat disappointed that some things we think a majority of Democrats want to see on a platform are not there — particularly Medicare for all.”

Cesario was relieved to see the convention go virtual for the safety of the delegates and the host city.

“And as a result…the Democratic National Convention is not going to be a super-spreader as opposed to some other well-known rallies in the past few months.”

I think this will have some lasting effects on how we do campaigns, conventions, and how we’ll do all of this in the future,’ Storey said, “and in the fiscal ramifications as well, I think this opens it up for a lot of different people. This is our first time doing it; things are only going to get better the more practice we have doing this.”