You are here: Home / Archives for 2012 Missouri Senate Race

The Libertarian party’s candidate for U.S. Senate has used one of his biggest platforms so far to make his case for your vote over Senator McCaskill or Congressman Todd Akin. 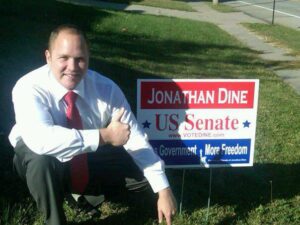 Jonathan Dine is a personal trainer from Kansas City. He says his party is the alternative to the typical frontrunners. “Like many of you I’m tired of the constant fighting of the Republicans and Democrats. Beating the other team has become more important than finding solutions to America’s problems.”

Dine says Republicans and Democrats are to blame for the down economy and says his party is the only one that’s serious about balancing the budget, lowering taxes and restoring personal freedoms. “Supporting my candidacy means supporting a drastically smaller government and lower tax level across the board. We do not need politicians telling us who we can love, what to do with our own body or what we can do with our own body.”

Dine says he supports a balanced budget amendment and the legalization of marijuana, and will vote against any spending measures that exceed federal revenue.

When asked what role the government should play, if any, in fighting obesity and the increased healthcare costs that come with it, Dine fell back on his 15 years as a personal trainer.

Dine says to provide healthcare for seniors, he would propose block granting money to the states based on population to put the money closer to the people. He supports a balanced budget amendment and the legalization of marijuana, and says he will vote against any spending measures that exceed federal revenue.

Missouri’s candidates for U.S. Senate have shared a stage for the first time, only days removed from a primary election that pitted them against one another. The candidates fielded questions from more than 200 farmers with Missouri Farm Bureau’s Political Action Committee. 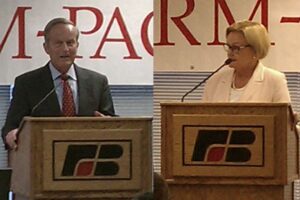 Big on the minds of farmers is the passage of the Farm Bill. The incumbent, Senator Claire McCaskill says she has been a strong proponent. “I think it’s an incredibly important thing to get done so you all have some certainty. We will get disaster relief done and it will be retroactive for the cattle. I know that will happen. I was bitterly disappointed that my opponent and some of his colleagues blocked a decision on the farm bill before we left to come home and work for the month of August.”

Congressman Todd Akin says he is comfortable with most of the farm programs in that bill, but he has an issue with what he says is an 80 percent increase in entitlement programs. “I’ve gotten to the point where I’m not so sure that the farm portion of it is reasonable enough that you might be able to just pass that by itself.”

McCaskill says the farm programs and entitlement programs are tied together so that urban legislators who aren’t concerned with farm issues will vote for the whole package.

Both candidates were also asked to discuss the estate tax, that farmers often refer to as the “death tax.”

Akin says he doesn’t believe in the tax. “I just think it’s a bad idea, and to have that death tax … go up to the degree that it is, up to 55 percent, I think that’s crazy and I’ve never voted for that and I support keeping the death tax as low as we can get it. As far as I’m concerned, what’s the right level? Well zero would be just about right for me.”

McCaskill says she cosponsored legislation that would extend the current estate tax rate of 35 percent, with an exemption for those making up to 5 million dollars. As to whether she would vote to eliminate it altogether, she says, “I would possibly vote for that if we could figure out a way to do a whole balanced approach on deficit reduction. If we could do something that would make sense, that we would be cutting spending, figuring out a way to make entitlements responsible and also look at the tax code in a way that doesn’t pick quite as many winners and losers. In the meantime, I basically told my leadership that I wouldn’t vote for anything that took it below five (million dollars).”