You are here: Home / Archives for 2012 General Election

The Missouri House of Representatives will continue to have a Republican majority following yesterday’s election. The chamber will have the greatest number of Republicans ever, at 110.

Now, the House GOP caucus must meet to sort out who will be its leadership. Representative Kurt Bahr (R-St. Charles) says that will happen later today at the State Capitol in Jefferson City.

Bahr explains why the majority leadership positions are significant. “When the speaker of the house and the majority leader strategize on what legislation do we as a caucus, as a party want to propose and push for and what bills do we want to support or try to prevent from happening, each of those members gets a seat at that table. So, even the caucus secretary, a less than glamorous position, has a seat at the table to have their input on leadership and strategy meetings. So who we vote for for those positions has a impact in public policy for our state.”

Having 110 members means House Republicans have enough members to vote to overturn a governor’s veto in that chamber.  A two-thirds majority vote would also be needed from the Senate to complete an override attempt.

A hearing takes place today in the lawsuit against the Secretary of State, over the ballot language written for an issue that would bar state officials from creating a state health insurance exchange without legislative or voter approval.  Cole County Circuit Judge Dan Green will hear the arguments. 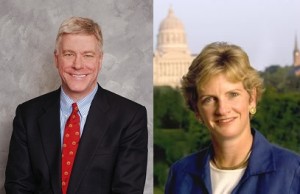 Lieutenant Governor Peter Kinder filed that suit, saying that ballot language is biased. “Tomorrow we’re going for a temporary restraining order asking the court to restrain the Secretary of State from moving forward with the ballot language. That’s a preliminary measure to stop further progress on that issue so that we can get to the merits of the issue (in the next hearing.)”

The hearing is also over consideration of a temporary injunction. Kinder says, “We’re holding our pants up with belt and suspenders both.”

Kinder says he hopes a decision will be made soon in the case. “We need it quickly because of the need to print military ballots … absentees and get them out.”

The Republican-led legislature voted this year to put that issue to voters.