You are here: Home / Archives for 2009 Spring Training

The Cardinals beat the Marlins 6-3 in the final spring game in Florida.  Todd Wellemeyer pitched five innings, allowing all three runs to score.  The team will now head to Memphis for two more games.  When the team leaves, they’ll be leaving third basemen Joe Mather behind.

Tony LaRussa made his final roster cuts and has the 25 man roster set.  Making the trip to St. Louis will be outfielder Colby Rasmus and infielders Brian Barden, Brendan Ryan and Joe Thurston.  Joe Mather who fell into a horrible slump, lost on the on the third base job to David Freese.

Mather was the front runner to take over for Troy Glaus at third base, but he went into a horrible hitting skid that included a 1 for 19 slump.  In the meantime, Freese bounced back from an Achilles tendon injury and got hot at the plate winning the job.

LaRussa like Mather and said he just needs to work his swing out.  I think it will be one of those situations where if Freese (who was acquired in a trade with San Diego for Jim Edmonds) struggles, they could call up Mather.  Glaus will be out until June as he rehabs from shoulder surgery. 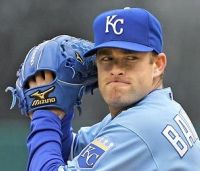 The Royals are sending starting pitcher Brian Bannister down to AAA Omaha along with Luke Hochevar paving the way for veterans Sidney Ponson and Horacio Ramirez to fill out the starting rotation.

Due to the number of off days that are built into the schedule in April, Ramirez will be the fifth starter, but only make about three starts.  The rest of the time he will be used as a long reliever.  Ponson will be the fourth starter behind Gil Meche, Zach Greinke and Kyle Davies.

The Royals traded first basemen Ross Gload to the Marlins for a player to be named later and cash.  Listen to manager Trey Hillman as he talks about Gil Meche’s final spring training start, why closer Joakim Soria is struggling and his thoughts on Bannister heading to Omaha. 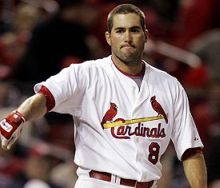 The Cardinals prepare for their final spring game in Florida before heading up to Memphis for the weekend with the AAA Redbirds before Monday’s season opener against Pittsburgh.  The Cards got news that Troy Glaus’ return will be delayed.

Glaus’ shoulder hasn’t recovered as quickly as expected from off-season shoulder surgery he had in January.   The Cardinals were reporting that his rehab hit a plateau.  Glaus headed to California where Dr. Lewis Yocum who performed the surgery, had another look.

Yocum recommended that Glaus work with physical therapist Keith Kocher in Arizona.  So Glaus will travel with the team to Memphis then up to St. Louis for the opener, before heading out to rehab.  He will be re-evaluated on June 1.

Chris Carpenter will skip his final spring training start as he recovers from a calf strain from earlier in the week.  He felt tightness while doing some running.  He’s rested a couple of days and as a precautionary measure, the Cardinals will rest Carpenter.  He’ll pitch a bullpen session on Friday.  He is still scheduled to pitch on Thursday against Pittsburgh.

It was made official yesterday, but it has been known since the start of spring training that Adam Wainwright will get the ball on opening day when the Cardinals open at home on Monday against the Pirates.

Wainwright pitched five innings giving up two runs on seven hits and walk while striking out four in the Cardinals 7-3 win over the Orioles.  The Cardinals hit three homers in the win.  Chris Duncan went deep in the third with two on and two out.  Jason LaRue followed with a homer in the fourth, and Joe Mather added his 2nd home run in the 8th.

Jason Motte gave up two hits in the ninth, but sealed the game in a non-save situation by not allowing any runs.  His ERA this spring is 1.59.  It would appear
that Motte will start the season as a closer, but yesterday manager Tony LaRussa
would not commit to a starter.

The Royals have narrowed their choices for the starting rotation by sending righthanded pitcher Luke Hochevar to Triple A Omaha.  There are now three right handers vying for two final spots.

In five Cactus League games, Hochevar had a 3.86 ERA and a 1-0 record in five games.  He gave up 17 hits and seven runs with four walks and seven strikeouts in 16.1 innings.

Last season, Hochevar made 22 starts for the Royals, going 6-12 with a 5.51 ERA before his season ended on Aug. 20 because of a rib-cage injury.  The number one pick of 2006 started last season in Omaha.

There are still 36 players in camp.  The breakdown is 18 pitchers, three catchers, 10 infielders and five outfielders.

The Cardinals beat the Marlins 2-1 thanks to a sacrifice fly and an error that led to both St. Louis runs.  That was all they needed as Joel Pineiro continues to look sharp this spring tossing another six scoreless innings.

Pineiro gave up just three hits while striking out five. Pineiro will make one more start in Memphis this weekend prior to the season, but he’s been happy with his pitching this spring thanks in part to getting a head start on his training and throwing as he prepared for the World Baseball Classic.

Colby Rasmus, who still may be on the roster bubble, scored from third base on a throwing error by Cameron Maybin with one out in the ninth inning to end the game. Khalil Greene’s single advanced Rasmus to third, and when Maybin’s throw to the plate got away from the catcher, Rasmus scored.

The Cardinals scored their first run on a sacrifice fly from Joe Mather that scored Brian Barden.  That one run held up until the 8th inning until Dennys Reyes gave up a run to the Marlins in the 8th.

The Royals have hit more spring training home runs than any other team this spring and they continued that trend against the Cubs.  Alex Gordon went deep twice and Mark Teahen hit his 6 th homer, but they tied Chicago 8-8.

Billy Butler’s RBI single, following singles by David DeJesus and Willie Bloomquist, snapped a 5-5 tie in the eighth. Gordon then hit a high fly to center that was dropped by center fielder Kosuke Fukudome allowing two runs to score on an error.

However, closer Joakim Soria came in with a chance to save the game, but blew the 8-5 lead in the ninth by giving up three runs on four hits and a walk.  Royals and Cubs tie at 8.

Kyle Davies, who is expected to start the season’s third game at Chicago, had his longest outing of the spring, 5 2/3 innings. He was charged with four runs on eight hits.

Listen to manager Trey Hillman as he talks about Gordon’s timing and the pitching of Davies and Soria.

Zach Greinke called it his second best outing of the spring, telling kcroyals.com, "stupid pitching maybe, but I was locating decent."  Greinke gave up eight runs in two innings, but the Royals beat Seattle 17-12.

Greinke, who will start the second game of the regular season, had a seven-run lead going into the second inning and a one-run deficit when the inning finally ended. He surrendered 10 hits and eight runs in the inning.

The bats were there all game for Kansas City.  Shortstop Tony Pena hit a two-run homer, and pinch-hitter Ryan Shealy topped off a nine run seventh inning with a three run blast.

It wasn’t as bad as his line score may look and there is no need to panic.  Chris Carpenter will be just fine after yesterday’s 4.2 innings and four runs given up in the Cardinals 5-3 loss to the Minnesota Twins.

Carpenter gave up seven hits and two walks, but at least three of those hits were not very hard and one was an infield single that led to a big inning.  The upside to Carpenter’s appearance was that he also struck out seven hitters.

As the Cardinals come down to the final week of spring training, there are still two big issues that need to be resolved.  The first is third base.  It appears that David Freese has the inside track over Joe Mather.  Freese had four hits and a couple of RBIs this weekend.  He even played first base yesterday while Mather covered third.  Mather had two hits to break out of a 1 for 28 slump, but will it be enough to overtake Freese.

The other pressing issue for manager Tony LaRussa is the final right handed spot in the bullpen.  It appeared a couple of weeks ago, Chris Perez would be in Memphis, but he has bounced back from shoulder discomfort early in the spring to have two good back to back outings.  LaRussa will carry five righties to go with Dennys Reyes and Trever Miller from the left side.  Joining Perez in that battle from the right side is Jason Motte, Ryan Franklin, Kyle McClellan, Josh Kinney and Brad Thompson.

One of those pitchers will be left out.  Right now, I’m figuring McClellan will be the odd man out.  He’s struggled this spring giving up another earned run in two innings on Saturday.  His ERA is 9.69.

Sidney Ponson arrived in Royals camp to compete with Brian Bannister, Horacio Ramirez and Luke Hochevar for the two final spots in the starting rotation.  He threw 87 pitches and left with a 7-4 lead, but the Royals fall 10-9 to Seattle.

Ponson gave up eight hits and six runs (four earned) while going 5.1 innings.  Mike Aviles put the Royals on top with a three run home to make the game 7-4, but reliever Victor Marte gave up two hits and the Mariners tied the game.  Former Royals player Mike Sweeney drove in the game winner with a single in the bottom of the ninth.