Two-and-a-half weeks into the Missouri Legislature’s session, a controversial K-12 public education package could come up for Senate debate soon. The Missouri Senate Education and Workforce Development Committee has voted in favor of the plan.

Three bills were combined into one – Senate Bills 4, 42, and 89. The provisions about transgender athletes were left out of the package.

The legislation deals with accessibility rights of parents on the education records of their child, including the ability to fully review the curricula, books, and other educational materials used by the school attended by their child; the ability to access information on teachers, guest lecturers, and outside presenters who engage with students at the school.

Under the plan, the state could withhold up to 50% of state aid from a district who does not follow the rules.

While there’s no set list of “standards” for parents’ rights, the Missouri Department of Elementary and Secondary Education (DESE) has provided the current list of rights parents have. Some are established in statute, while others are standard/common in district policies.

• Right to inspect/review/amend student records as permitted under the Family Educational Rights Act (FERPA)
• Appeal rights for long-term suspensions/expulsion
• Parent notification of use of seclusion/restraint
• Consent for psychological testing
• Parent notification and consent for certain student surveys
• Exemptions in certain cases from immunization requirements
• Right to challenge instructional materials/internet-based resources
• Rights afforded under the Missouri Student Religious Liberties Act (Section 160.2500, RSMo)
• Right of foster children to continue in their school of origin unless it is not in their best interest 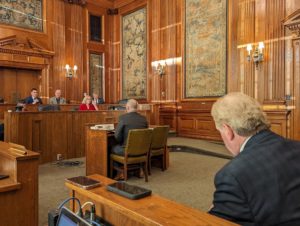 The legislation further includes provisions that would restrict the teaching of the 1619 Project, Critical Race Theory or similar instruction. The body of work, largely taught in higher education, says racism and inequity are embedded in institutions and legal systems.

Other provisions would require the state to create a training program for educators to teach principles of American civics and patriotism.

“My children go to our parish school,” he said. “I think they spent maybe one day on the Civil War, kind of barely got to the Civil War, or I mean World War Two. I’m like buying books and kind of extra things to kind of explain more of those things, too. I think we need more of a discussion.”

“This bill, I’m sorry to say, limits what we can discuss, what teachers can discuss,” she said.

“This is a censorship bill, in violation of the First and 14th Amendments of the United States Constitution,” said Henriquez. “SB 42 seeks to ban speech that can help counteract racism and discrimination including bans on students and teachers talking about race and the notions of equality.”

Sen. Andrew Koenig, R-Manchester, is the sponsor of the bill.

“The type of behavior that they’re trying to prohibit from being teached is blaming an entire race for some action in the past,” he said.

The Missouri Senate could debate the bills at any time.