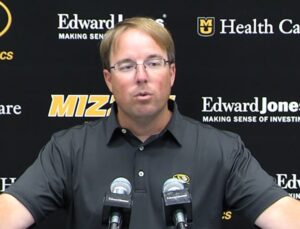 The Mizzou Tigers are getting ready to take on another ranked opponent this week, going up against number-24 Kentucky at home.

Mizzou has won its last two games, getting its best defensive outing of the year holding South Carolina to just 203 yards and the offense didn’t turn the ball over. This week Mizzou comes into the game with the 19th best defense in the country and Kentucky is just one spot behind them.

The challenge this week is can the offensive line hold up and can Mizzou somehow find a way to get in the endzone in the second half? In the six games this season against Power 5 schools (five SEC matchup and the game at K-State) the Tigers have scored just two touchdowns in the second half of those games and one of those was a Cody Schrader TD run that came on the final play of the game against K-State in that 40-12 loss.

Kentucky’s defense was shredded by number 3 Tennessee losing 44-6 and their quarterback Will Levis was picked up three times. Kentucky’s offense has been prone to turnover like the Tigers.

Mizzou has lost five of their last six matchups to Kentucky.

Saturday’s game starts with an 11am kickoff.