Ballot selfies became a thing a few years ago around the time pop singer Justin Timberlake posed while casting his vote. Posting the photo on social media could have put him in hot water because it became illegal to take photos inside Tennessee polling locations in 2015. The county attorney there chose not to pursue the matter. 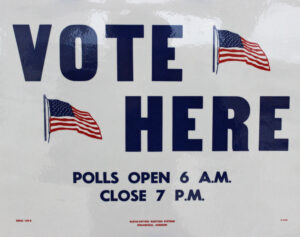 Some states allow voters to post photos showing them casting their ballots and some do not. Here in Missouri, it is a class four election offense to allow a ballot to be seen by any person with the intent of letting it be known how he or she is about to vote or has voted. Doing so could be punishable by jail time of up to one year and a fine of up to $2,500.

The law does not restrict you from going on social media and giving your political viewpoints and support of certain candidates.

How vigorously this law is enforced is unknown. The other question is did you know about this 2018 state law? Friends and family might need a reminder around election time.

A Missouri Attorney General’s Office worker posted a photo on social media showing which candidates he chose in Tuesday’s municipal election. Jay Atkins, who serves as the office’s general counsel, posted a photo on Facebook showing a marked ballot, with a caption that read, “Long live the revolution!”

The Missouri Attorney General’s Office declined to comment. Atkins did not respond to a request for comment.

Missouri’s municipal election day has wrapped up but two more major elections are scheduled this year – the state’s primary election in August and the general election in November. If you plan to vote, keep these other election laws in mind:

*On the part of any employer, making, enforcing, or attempting to enforce any order, rule, or regulation or adopting any other device or method to prevent an employee from engaging in political activities is a class four election offense.

*Guns are not allowed at polling locations – unless you are a law enforcement officer.

*Political signage, clothing and accessories are not allowed at polling locations.

*Persuading people to vote for certain candidates or political parties is prohibited inside of a polling place or within 25 feet of one.

Previous Post: « Missouri’s Children’s Division has hundreds of open jobs – and the boots on the ground are ‘drowning’
Next Post: (LISTEN) Part Two: Missouri underfunds efforts to help struggling Missouri schools – by millions »