The U.S. Navy Blue Angels are set to return to Missouri for the Spirit of St. Louis Air Show and STEM Expo. 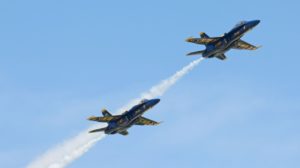 Aircraft lovers will see the latest in air technology along with classic WWII fighters and show aircraft.

Veterans will be honored with the Patriots Landing.

All tickets to the June 11-12 event will be sold online only. Here’s a link to the ticket site.

The North American Aviation P51 Mustang is a long-range single-seat American WWII fighter aircraft that helped ensure Allied air superiority in Europe.
Along with “Moonbeam McSwine” the Corsair and Skyhawk will take to the air. The Corsair is a carrier-capable fighter aircraft that saw service in WWII and the Korean War. The Skyhawk came along after the Korean War as a jet-powered replacement for the A-1 Skyraider. It was flown by both the US Navy and the US Marine Corps.

President of the Spirit of St. Louis Air Show Committee and St. Louis Airport Director John Bales says, “These are some inspirational aircraft. We want our guests to look to the skies and be inspired. And then, through the impact of our huge STEM Expo, we want to guide that inspiration into some amazing careers and opportunities for young people.

The air show will also feature the following:

Previous Post: « Blunt questions top intelligence team about China’s role with Russia (LISTEN)
Next Post: Rep. Wagner on Ukraine border mission: One of the most consequential trips I’ve ever made (LISTEN) »