The Missouri State Highway Patrol reports zero traffic deaths over the extended 2022 New Year’s holiday weekend. The number could increase if someone dies of injuries sustained in a weekend crash after the time of this posting.

The patrol worked 406 crashes compared to last year’s 173 crashes. Winter weather could be a factor behind the increase. MSHP says six people were killed and 48 injured during the 2021 holiday weekend. Over the 2022 holiday, troopers say 91 people were hurt.

Also, between 6:00 Thursday evening and 11:59 last night there were no boating crashes or drownings over the 2022 New Year’s holiday counting period. 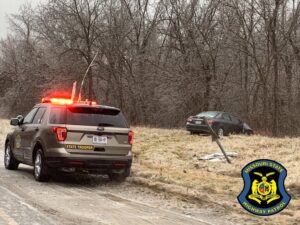 MSHP reported during the 2021 78-hour New Year’s counting period, there were 1,247 traffic crashes statewide. Six people were killed in those crashes and another 389 people were injured. Troopers worked 173 of the crashes including three deaths and 48 injuries. Troopers arrested 94 people for driving while impaired last New Year’s holiday, which is the exact number as 2022.