In Columbia, a new building is named for U.S. Senator Roy Blunt, a tribute to the attention and funding he has given to health research while he has served in Congress.

The Roy Blunt NextGen Precision Health building will house a newer type of research – focused on individual cases of illness or response to treatment—including clinical trials. 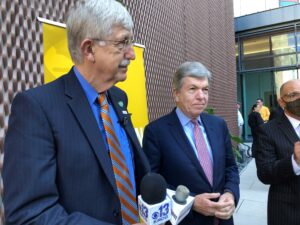 At the grand opening of the facility, National Institutes of Health Director Francis Collins praised the concept when he addressed the crowd of politicians, administrators and scientists.

“So what is precision medicine, precision health? What’s this precision thing all about anyway. It’s a term that’s only been around for a few years. And I will tell you, it’s kind of the opposite of one size fits all. We’re all different. We have different kinds of environmental exposures, different health behaviors different, oh yeah, DNA, I will have to point that one out too,” Collins said. “Cancer is certainly an example of this. Every cancer has a different set of misspellings in the genome. And if we want to manage a cancer in the most effective way, you don’t want one size fits all. You want precision, cancer genomics, which is now the kind of thing that will be happening here in a big way.”

The Roy Blunt NextGen Precision Health building will house health research projected to bring in almost five billion dollars to the state’s economy over the next 25 years. The research projects will tap into the resources of all of the UM campuses, private companies and government scientists in a “lab bench to bedside” approach.

Collins worked with the human genome project and has served under three presidents. Yet, he says it is Blunt who changed the way Congress treats healthcare research – and funding.

“During that six-year period, NIH experienced no less than a 43 percent increase in its budget, and most of that goes out there to places like this. So when you see the advances in medical research that have become possible in those five or six years and the people who are coming into this field and finding it possible to get funded by NIH grants, this is the guy who made this kind of a trajectory happen for which I will always be grateful,” Collins said.”

Blunt retires in 15 months but says he plans to spend the remainder of his time in office drumming up support for health research, including the creation of a new institute at NIH devoted to advanced research for health care.

“Where the government partner, in a promising moment, becomes a more active partner…just like with Radx [developing COVID-19 rapid tests in record time].” Blunt said. “A way to move forward now with the promising moments where the government can be more involved and get that precision medicine answer to people quicker than they would otherwise And clearly, this facility can and will be a critically important part of that.”