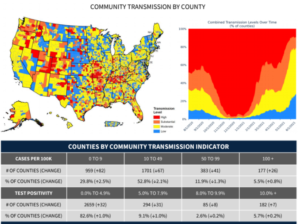 New coronavirus cases nationwide have plummeted since vaccinations became widely available, but in Missouri, cases have spiked 52% over the past week, according to a new report.

The data from the New York Times says Missouri has the most cases per 100,000 residents.

The Department of Health and Senior Services issued a news release last week saying the dangerous Delta variant has become prevalent throughout the state. Missouri had double the hospitalization rate, 12 per 100,000 residents, as the national average in the past week. Only the District of Columbia fared worse, at 13.