(NASCAR)—Alex Bowman seized the lead with a fast pit stop with 96 laps left at Dover and he never gave it up, becoming the second driver this year to post two Cup victories.  He held off three Hendrick Motorsports teammates to beat Kyle Larson to the line by about two seconds.

Larson had dominated the race, leading 263 of the 400laps and winning the first two stages.  Chase Elliott and William Byron finished third and fourth, giving Hendrick his first sweep of the top four finishing positions in the team’s 38-year history.  Only two other teams in NASCAR’s 70-plus years have finished in the first four positions in a race. 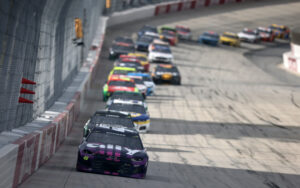 It’s the second win of the year for Bowman who joins Martin Truex Jr., who has three wins, as the only drivers through 13 races with multiple wins.

NASCAR heads to the Circuit of the Americas road course near Austin, Texas next weekend.

(INDYCAR)—Tomorrow is here for INDYCAR.

Rinus VeeKay has become the third INDYCAR driver this year to win his first race in the series.  VeeKay beat pole-sitter Romain Grosjean by almost five seconds on the road course at the Indianapolis Motor Speedway this weekend.  Alex Palou, also a first-time winner this year, took the final podium position. 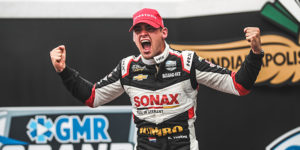 VeeKay, at 20, is too young to legally drink the champagne in victory circle but it’s not for drinking anyway—it’s for spraying. And it was. He’s the sixth-youngest winner in INDYCAR series history.  He has given Ed Carpenter Racing its first victory since Josef Newgarden won at Iowa almost five years ago.

VeeKay, Palou, and Pato O’Ward, who won at Texas, have given INDYCAR three first-time winners in one racing year since 2013.

VeeKay was the series rookie of the year last year. He took the lead this weekend from reigning series champion Scott Dixon when Dixon made his final pit stop on lap 65 of the 85-lap race.  Dixon finished ninth but retains his points lead.

Grosjean, who moved to INDYCAR this year after a ten-year career in Formula 1, achieved his first podium finish in six years, when he was driving for Lotus.  He started from the pole and led 44 laps.

Veekay, O’Ward, and Palou are among an impressive crop of younger drivers in INDYCAR.  Palou is 20; O’Ward turned 21 on May 6, and Palou is barely 23.

INDYCAR returns to the track Tuesday for practice leading to next weekend’s qualifications for the 105th Indianapolis 500. Thirty-five cars will be competing for the 33 starting positions in the 500 in two weeks.

(FORMULA 1)—The engines were quiet this weekend in F1.  Racing resumes with the GP of Azerbaijan on June 6.