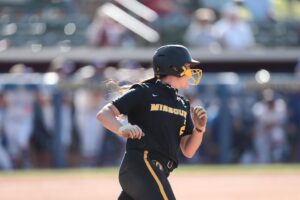 No. 15 Mizzou Softball fell in another heartbreaker to No. 4 Florida. The Tigers trailed 5-1 entering the sixth and took the lead by scoring one in the sixth and four in the seventh. Ultimately, the Gators would score two in the bottom of the seventh to advance to the SEC Final by a score of 7-6.

The Tigers took the lead right off the bat in the top of the first. Brooke Wilmes and Jenna Laird led off the game with a pair of singles. After Wilmes moved over to third, Casidy Chaumont brought her in with an RBI groundout.

In the top of the second, Mizzou had a chance to add on to the lead. Cayla Kessinger led off with a single, but a double play cleared the bases. The Tigers drew a pair of two out walks to threaten, but they were left stranded.

Florida was able to tie it up in the bottom of the second. A one out single and a double put runners on second and third before another single scored one. Mizzou was able to prevent any further damage by cutting down a runner at home on a fielder’s choice to Kimberly Wert.

Mizzou loaded the bases with two outs in the top of the third, but the Tigers were unable to regain the lead.

Florida was able to capitalize in the bottom of the third. After an 0-2 single with one out, the Gators took the lead on a two-run home run to left center. Laurin Krings entered and struck out the next two batters to end the inning.

In the top of the fourth, the Tigers were again able to get a runner on third with two outs. Missouri was not able to capitalize in this instance, leaving the runner stranded.

Florida added to the lead in the bottom of the fifth. A one-out double to left field scored a runner on first that reached after being hit by a pitch. The runner reached third on the play, which was held up after being reviewed. The runner was held at third on a groundout, but a double steal allowed her to score. The Gators led 5-1 after the fifth.

Previous Post: « What you need to know about the top Missouri bills passed, not passed this legislative session
Next Post: Feral hog and prescribed burning legislation now on Missouri governor’s desk »