(NASCAR)—Kyle Bush grabbed the lead on the final restart at Kansas Speedway and held on for the last ten laps to become the tenth winner in eleven NASCAR Cup races this year.  And he did it on his birthday, the second time in his career he has celebrated a birthday with a Cup win. Only Cale Yarborough in NASCAR history also has done that twice.

Busch now has won at least one race in 18 consecutive Cup seasons.  Only Richard Petty had a longer string, nineteen, 1960-1977.

Kevin Harvick had his best finish of the year in second.

The race belonged to another Kyle, Kyle Larson, most of the way. He led 132 laps but lost the lead late and tangled with Ryan Blaney on the last restart and finished 19th.

(INDYCAR)—Rising star Pato O’Ward passed two-time INDYCAR champion Josef Newgarden in the closing laps of the Sunday race at Texas Speedway to pick up his first victory in the series.  He beat Newgarten to the flag by more than 1.2 seconds. 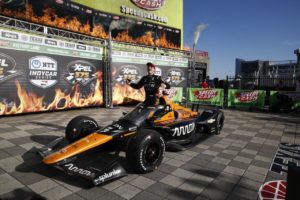 O’Ward averaged more than 169 mph for the race. Graham Rahal picked up the third podium position, ahead of six-time series champion Scott Dixon, who had started from the pole and led 163 of the 245 laps.

The race was the second of a weekend doubleheader. Saturday night’s race went to Dixon, who led 206 of that race’s 212 laps. He finished a quarter-second ahead of fellow New Zealander Scott McLaughlin, who is in his rookie season after winning three Australian VA Supercar championships. O’Ward finished third in the Saturday night race.

The win was the 51st in Dixon’s INDYCAR career, leaving him only one behind Mario Andretti for second on the all-time winner’s list.  A. J. Foyt had 67 victories.

Indycar moves to the 14-turn, 2.439 mile road course at the Indianapolis Motor Speedway on Saturday, May 15.

(FORMULA 1)—-Lewis Hamilton, denied by his teammate the 100th pole of his F1 career, got the P1 he wanted most anyway in the Grand Prix of Portugal.  He settled for his 97th Grand Prix victory, extending his record. And it wasn’t close.

Hamilton finished almost a full half-minute ahead of Max Verstappen and another five seconds ahead of teammate Valtteri Bottas, who had beaten Hamilton for the top starting position.

The three battled fiercely in the opening laps with Hamilton dropping from second to third briefly before getting past Bottas for the lead he then enlarged.