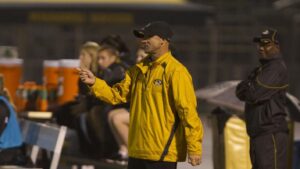 Bryan Blitz, the only head coach in the history of Mizzou’s 25-year-old soccer program, is stepping away from the program he built from scratch to spend more time with his family, Mizzou Director of Athletics Jim Sterk announced today. Blitz informed the team Sunday of his decision.

“I have run my race, after 25 years it is time for me to step aside and spend more time with my family, including my wife Alie, my children Madison, Connor, Abigail and Oliver, and my mother and father, all of whom have been so supportive of this program,” said Blitz, a 2021 Missouri Sports Hall of Fame inductee. “I love everything about Mizzou—three of my four children were born at the MU hospital on campus, five family members are MU system graduates and four work on campus today. We bleed Black & Gold.

“It has been an honor and privilege to have built the Mizzou Soccer program from the ground up, and I am incredibly grateful and humbled for having had the opportunity to work with so many wonderful and talented players, coaches and staff who have provided me with life-changing memories, experiences and relationships,” he added. “I am grateful for the chance that Joe Castiglione gave me when he hired me, and the support that our program has received over the years from his successors, Mike Alden, Mack Rhoades and Jim Sterk, as well as the guidance from my sport administrators, Tim Hickman and Sarah Reesman, during my career.”

A four-time conference Coach of the Year honoree in three different leagues, Blitz was so honored by the Midwestern Collegiate Conference in 1995 while serving at Butler, and at Mizzou by the Big 12 in both 2007 and 2009, as well as in 2015 by the Southeastern Conference. He guided Mizzou to seven NCAA Tournament appearances, one regular-season Big 12 title and one Big 12 Tournament championship during his 25-year run in Columbia, and ranks 31st among active Division I women’s head coaches in victories.

“We are grateful for Bryan’s hard work, dedication and service to Mizzou Soccer over the last 25 years, and wish him and his family well,” Sterk said. “Bryan put his heart and soul into this program while developing student-athletes who have gone on to have great success beyond the pitch.”

On Blitz’s watch, 10 players have earned first-team all-conference honors in either the Big 12 or the SEC, while Nikki Thole represents the program’s lone All-American, having been honored in 1999.

The 1999 campaign symbolized the official establishment of the Mizzou Soccer program, just four years after its founding, when Blitz led the Tigers to a 14-8-1 record and their first-ever NCAA Tournament appearance. That season, the Tigers also received their first-ever national ranking, reaching as high as No. 17. Additionally, Mizzou reached the Big 12 Tournament championship game for the second consecutive season. The first NCAA Tournament game in program history proved to be a thriller, as Mizzou fell to Marquette in four overtimes (3-2). At 141 minutes and 13 seconds, that game continues to be the longest in Mizzou history.

Blitz returned the Tigers to the NCAA Tournament in both 2003 and 2007, reaching the second round both seasons. He earned 2007 Big 12 Coach of the Year honors, and in 2008, led Mizzou to its first Big 12 Tournament title and the automatic NCAA Tournament bid that comes with it. The following season, Mizzou won the Big 12 regular season title for the first time in school history, and Blitz again received Big 12 Coach of the Year recognition.

In 2012, Blitz faced a new challenge as Mizzou transitioned into the Southeastern Conference. In the program’s first SEC season, the Tigers reached the NCAA Tournament once again and achieved a national ranking as high as 11th, the highest in program history. Mizzou would again reach the NCAA Tournament in both 2014 and 2016, while Blitz would earn 2015 SEC Coach of the Year honors after leading the program to a 7-2-2 conference record and a runner-up finish.

Blitz began his coaching career in 1991 at Butler University, where he served as the Bulldogs’ inaugural head coach, and led the program to a 45-44-8 record in five seasons. While at Butler, he was named the 1995 Midwestern Collegiate Conference Coach of the Year after leading the program to a perfect conference record and its first-ever national ranking. He was also invited to help coach the U.S. Women’s National Team.

“I believe that this is one of the best jobs in the country and I am excited to watch how far the next coach can take the program, and I look forward to becoming Mizzou Soccer’s new super fan,” Blitz said.

Mizzou ended the 2020-21 season with a record of 6-5-3 after Saturday’s 1-0 victory over longtime rival Kansas. A national search for Blitz’s replacement will begin immediately, Sterk said.