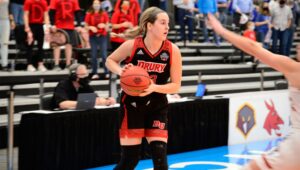 The Drury Lady Panthers nearly pulled off another comeback in the Elite Eight, but this time the rally came too late as Lubbock Christian defeated Drury 69-59 for the NCAA-II National Championship on Friday night at the Greater Columbus Convention Center in Columbus, Ohio.

The Lady Panthers ended their year 24-2 and is the NCAA-II Runner-Up for the second time in program history. The Lady Chaparrals took the national title and completed their season with an undefeated record at 23-0.

Lubbock Christian’s national championship seemed inevitable as Drury trailed 60-39 with 6:26 remaining. But the Lady Panthers, who forced a 28-point swing in the national quarterfinals against Charleston and never led in the semifinals until the second half before advancing past Lander, incredibly worked their way back into the contest and Allie Clevenger’s three-pointer with 57 seconds left brought DU within four, 63-59.

The Lady Chaps hit free throws down the stretch, however, to hold off the Lady Panthers.

“The first thing I’m going to tell my team in the locker room tonight is how proud I am to stand on the sidelines with them,” said Drury head coach Amy Eagan. “Obviously, they made this year really special. We’re all hurting; we wanted a different outcome. But in a day or two, or maybe a week, I expect all of us to look back at this and be so proud of each other.”

Lubbock Christian, the nation’s best defensive team in D-II holding opponents to 49.5 points per game, stymied the Lady Panthers early to own a 22-12 after the opening period. Drury pulled within eight at halftime, 32-24, but found themselves down double-digits again as the Lady Chaps went on an 8-2 run and to put DU behind 51-38.

Trailing by 21 midway through the final period, the Lady Panthers delayed the celebration in Texas as they went on a 19-4 run capped by Clevenger’s trey in the final minute. Lubbock Christian’s five senior starters, and the best free-throw shooting team in NCAA-II at .813, refused to relinquish the lead in the closing moments.

“We started slow defensively, but we pressured them more in the second quarter, and I think that hurt them as we held them to 10 points that period,” said Eagan. “But we just struggled to score tonight. We tried a little bit of everything – motion, ball screens, but unfortunately, it just wasn’t our night.”

Lubbock Christian, the nation’s best defensive team allowing just 49.5 points per game, stymied the Lady Panthers most of the game, but the Lady Panthers ended up with one more made field goal than the Lady Chaps. DU was 23 for 58 from the floor, while LCU made 22 of their 45 attempts. The difference was from the free-throw where Lubbock Christian was 17 for 24 while Drury went just 7 for 10. The Lady Chaparrals also outrebounded Drury 36-26.

Paige Robinson scored 20 points to lead the Lady Panthers, and Emily Parker ended her career with 15.

Drury was playing in the national championship for the second time in program history and for the first time since 2004. The Lady Panthers were playing in their fifth Elite Eight and their 18th NCAA-II tournament in 21 years.