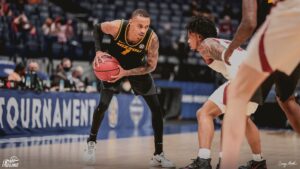 Mizzou Men’s Basketball dropped a hard-fought matchup to No. 8 Arkansas, 70-64, in the quarterfinals of the SEC Tournament on Friday night in Nashville, Tennessee. Both teams committed 41 combined turnovers and 45 combined fouls in a physical matchup.

Mizzou was outrebounded by the Razorbacks, 36-31. Arkansas guard JD Notae led all scorers with 27 points, including a game-sealing offensive putback off the glass with 1:19 remaining.