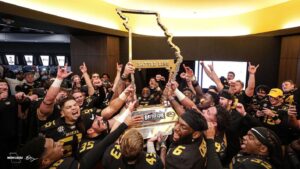 CBS, in partnership with the Southeastern Conference, has announced that the annual Battle Line Rivalry Game presented by Shelter Insurance between Mizzou and Arkansas will be played Friday, November 26, at Donald W. Reynolds Razorback Stadium in Fayetteville, Ark., with kickoff set for 2:30 p.m. (Central).

The game had been played on the Friday after Thanksgiving every year from 2014 through 2019 before COVID-19 forced alternations to both teams 2020 All-SEC schedule.

The two programs will meet for the 13th time in 2021. The Tigers have won the last five meetings and lead the overall series, 9-3, after last year’s come-from-behind 50-48 walk-off victory in Columbia. Arkansas’ last series victory was a 28-3 decision in Columbia during the 2015 season.