You are here: Home / Sports / All-SEC honors for Dru Smith and Jeremiah Tilmon 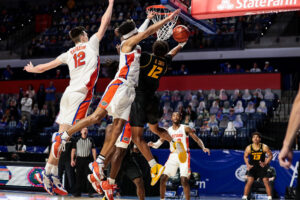 Smith and Tilmon, Jr., mark the first pair of Tigers to earn All-SEC honors in the same season since Jabari Brown and Jordan Clarkson in 2014. Smith is the first Tiger to claim a spot on a league All-Defensive Team since Mizzou joined the Southeastern Conference and the first since 2012 when Michael Dixon did so in the Big 12.

Smith becomes Mizzou’s first All-SEC first-team selection since Kassius Robertson in 2018 and the Tigers’ fourth since joining the league (Phil Pressey – 2013, Brown – 2014, Robertson – 2018). He led the SEC in steals for a second consecutive campaign with 2.1 thefts per game in league play. Additionally, he ranked third in assists (4.2 APG), 13th in scoring (14.8 PPG), fourth in free throw percentage (.839) and third in assist-to-turnover ratio.

Smith was a three-time SEC Player of the Week during the regular season, the only player in the conference to nab the honor three times. He’s averaging 14.1 points, 3.4 boards, 3.9 assists and 2.0 steals, one of just seven players nationally hitting all those marks this season. He scored in double figures 18 times in 23 games, leading Mizzou in scoring, assists and steals. Smith did all that while being tasked with guarding the opposing team’s best player night in and night out.

Tilmon, Jr., finished the campaign ranking fourth in the SEC in rebounds, third in offensive boards and seventh in blocks. He led the league in double-doubles with seven. Tilmon, Jr., enters the postseason needing 14 points to become the 47th member of Mizzou’s 1,000-point club and the sixth Tiger in program history with 1,000 points, 500 rebounds and 100 blocks (Arthur Johnson, Laurence Bowers, Steve Stipanovich, Doug Smith and Jevon Crudup).

Smith, Tilmon, Jr., and Mizzou launch the postseason with the SEC Tournament this week in Nashville at Bridgestone Arena. No. 7-seed Mizzou will face 10-seed Georgia on Thursday at 6 p.m. CT on the SEC Network.