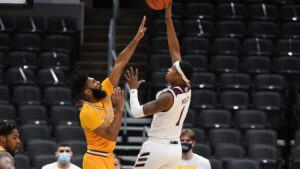 Third-seeded Missouri State advanced to the semifinals of the Missouri Valley Conference Tournament for the second year in a row with a 66-55 win over Valparaiso here Friday.

“You know he’s a good player and he’s gotta be good for us to be good,” said Bears head coach Dana Ford of Mosley. “He was locked in. At this stage you’re players have got to play.”

MSU (17-6) also got 11 points from Gaige Prim in the victory, with Jared Ridder posting 9 points.

The Bears throttled Valpo in the first half, holding the No. 6 seeded squad nearly 11 minutes without a field goal during one stretch with 16 consecutive misses to lead by as many as 20 and 31-13 at the break. Valparaiso was 4-of-30 from the field in the opening period.

Meanwhile, the Bears found a hot hand in Mosley who was 7-of-10 with a pair of 3-pointers to finish with 16 points at the midway point.

In the second half, a 3-pointer by Keaton Hervey 90 seconds into the final stanza pushed the Bears ahead 36-15 for their biggest lead of the night. Five minutes later, Mosley’s back-to-back buckets made it a 42-23 game with 14:12 to play.

The Valparaiso squad then made its best run of the game, reeling off nine unanswered and a 13-2 run over a two-plus minute stretch to get it to 44-36 with 11:32 remaining. But a quick counter-punch by Missouri State came moments later on a triple by Ja’Monta Black and a pair of free throws from Mosley to push the Bears lead back to 13.

In the clutch, Ridder knocked down a pair of 3-pointers, and MSU was 6-for-6 at the line over the last six minutes to keep the surging Valpo squad at arm’s length as Ford’s squad maintained its double-digit advantage.

MSU (17-6) now squares off with No. 2 seed Drake in the Arch Madness semifinals on Saturday at 3 p.m. Drake advanced without having to play a quarterfinal game as its foe, Northern Iowa, had to withdraw from the tournament due to a positive COVID test in its Tier 1 group.