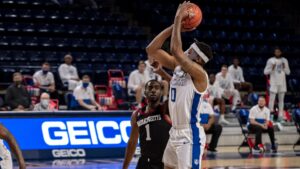 Javonte Perkins posted a team-best 25 points, and Jordan Goodwin collected his 14th double-double on the season, recording 18 points and 14 rebounds.

Yuri Collins connected on two shots from behind the arc, on his way to tying a career high of 17 points. The sophomore also dished out five assists and grabbed five rebounds.

The Billikens outrebounded UMass 45-22 in the game, including 15-3 on the offensive glass.

The Minutemen cut SLU’s advantage back to single digits with a score of 65-56 at 9:30 in the second half.

Perkins and Collins combined for the final 10 Billiken points, with eight coming at the free throw line, and SLU went on to beat UMass 86-72.

Tre Mitchell posted a game-high 30 points, along with six rebounds, to lead the Minutemen.

The No. 4 seeded Billikens will square off with regular season conference champion St. Bonaventure in the semifinals on Saturday. Tipoff is at 5 p.m. (CT)