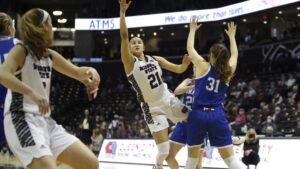 Missouri State improved to 3-0 in Missouri Valley Conference play for the third consecutive season Friday, using 14 steals and a plus-13 turnover margin to overcoming sharp-shooting Drake by a 73-72 final at JQH Arena.

The 25th-ranked Lady Bears (7-2, 3-0 MVC) got 16 points and a season-high four 3-pointers from Elle Ruffridge to lead four scorers in double figures, and owned a 13-point advantage late in the third quarter before holding off Drake’s (7-7, 5-2) comeback bid to top the Bulldogs for the fifth time in the last six meetings.

Missouri State never trailed in the contest and led 18-8 midway through the first quarter thanks in large part to three of Ruffridge’s treys, taking a 25-16 lead after 10 minutes and carrying that same margin into halftime at 38-29 after leading 36-23 midway through the second period.

The Bulldogs chopped MSU’s lead to 43-39 early in the second half, but it was back to a 13-point gap on Mya Bhinhar’s acrobatic runner with 18 seconds left in third period to make it 59-46.

Drake staged a furious fourth-quarter comeback, shooting 10-for-16 in the final 10 minutes to finish at 59.6 percent in the game, the highest total against the Lady Bears since December 2018. The Bulldogs made it 65-63 with 3:51 left when Abby Hipp and Jasmine Franklin responded for a 69-63 MSU lead.

Brice Calip countered a Drake trey with two of her 15 points for a 73-68 lead with 1:09 left, and the Bulldogs scored and regained possession with enough time to miss a pair of game-tying 3-point attempts before hitting a two-pointer at the buzzer for the final 73-72 margin.