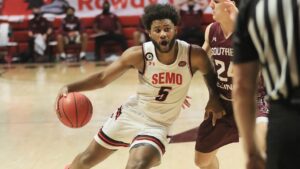 Jake Wolfe scored 26 points and made a 3-pointer at the buzzer to send the game to overtime leading Lipscomb (2-4) to a 80-74 win Wednesday night at Allen Arena.

LU was down four with 50 seconds left in regulation and pulled to within one (61-60) on a Wolfe layup. Jordan Love was later fouled and went to the free throw line to shoot two free throws. Love made the first and missed his second shot, and the Redhawks led, 63-60.

Wolfe then splashed in an off-balance three to send the game to overtime.

LU went a perfect 8-of-8 at the free throw line to pull away and avenge an earlier loss to SEMO two short days ago.

Nygal Russell scored five points in a quick 42 seconds and made a free throw to tie the game at 44-44 with 8:51 on the clock.

Nolan Taylor’s layup gave SEMO its first lead since the first half at 47-46.

Four free throws by DQ Nicholas off a pair of LU technical fouls helped widen the Redhawks lead to 55-46 with a little over six minutes left. SEMO led the rest of the way until Wolfe’s game-tying trey.

SEMO struggled to get shots to fall in the first half and trailed, 18-17, when LU went on a 14-2 run to open a 13-point advantage (32-19) with 2:31 remaining. The Bisons heated up to drain a 3-pointer on three-straight possessions at the end of that surge.

A 3-pointer by Chris Harris was the final basket of opening stanza as the Redhawks were down, 32-22, at halftime. Harris made all three of SEMO’s 3-pointers in the first half.

SEMO also shot 32 percent on 7-of-22 from the field and turned the ball over eight times in the first 20 minutes of the contest.

The Redhawks committed 21 turnovers and missed 10 free throws (18-of-28), while finishing with a 45.5 percent clip from the field. SEMO outrebounded the Bisons, 41-25, and had 15 offensive boards.

Harris paved the way with a career-high 21 points on 7-of-17 field goals. Four of Harris’ makes were beyond the arc. Nicholas followed with 17 points, the 11th double-digit game of his career.

SEMO, which split its home-and-home series with LU, played an overtime game for the second time this season.

The Redhawks return to action when they travel to Missouri Valley Conference member Evansville on Dec. 15.