Harrison Mevis, kicked a 32-yard field goal as time expired giving the Missouri Tigers a 50-48 come-from-behind win over Arkansas in the latest Battle Line Rivalry matchup, Saturday at Faurot Field. This was the fifth straight win for Mizzou over the Razorbacks in this series.

Harrison Mevis FOR THE WIN 🙌 pic.twitter.com/yiW9TGZIIF

Mizzou trailed 40-26 with 13:15 left to play in the game and registered their largest fourth quarter rally in school history, according to Mizzou athletics.

Two plays after the Hogs went up by 14, Tyler Badie ran a touchdown 46 yards capping off a two-play 75 yard drive to close to 40-33. After forcing a punt, Mizzou went back on the attack and scored on an eight-play, 82 yard drive taking just over two minutes to tie the game 40-40. It was capped by Larry Rountree’s nine-yard run, his third rushing touchdown of the day. The defense held Arkansas on a 3-and-out and immediately answered with a 25-yard run on a quick four-play drive.  The Tigers scored 21 points in 7:56.

Arkansas put together a 14-play drive covering 75 yards and decided to go for a two-point conversion. After having good coverage and what looked to be a game winning interception, Jamaal Woods had the ball bounce of his chest and caught by the Razorbacks in the end zone for the two points.

“Don’t drink the Kool-Aid. I could still call you Janimisski next week!” Parting words from @CoachDrinkwitz as he passes the postgame mic off to his game winning kicker @kickerhmevis6 #Mizzou pic.twitter.com/EviPdNB4GV

The Tigers outgained Arkansas 653-566.  Bazelak was turnover free for 380 yards. Rountree ran for 185 and three scores. Keke Chism had six catches for 113 yards.

Mizzou’s top linebacker Nick Bolton was ejected from the game in the second quarter for a targeting penalty. The SEC later gave explanation as to why the call stood after video review.

The player was determined to be in violation of NCAA Rule 9-1-4, which is as follows:

Targeting and Making Forcible Contact to Head or Neck Area of a Defenseless Player ARTICLE 4. No player shall target and make forcible contact to the head or neck area of a defenseless opponent with the helmet, forearm, hand, fist, elbow or shoulder. This foul requires that there be at least one indicator of targeting (See Note 1 below). When in question, it is a foul (Rules 2-27-14 and 9-6). (A.R. 9-1-4-I-VI)

Note 1: “Targeting” means that a player takes aim at an opponent for purposes of attacking with forcible contact that goes beyond making a legal tackle or a legal block or playing the ball. Some indicators of targeting include but are not limited to:

The issue I had with the call was that on a different replay angle, Bolton’s helmet never makes contact with the receivers helmet. It was clearly shoulder-to-shoulder. 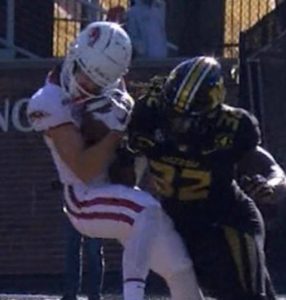 After the game, without seeing the video, Drinkwitz said he understood the call of targeting.