An independent investigation into the recent COVID-19 deaths at Missouri veterans homes has found that the Missouri Veterans Commission (MVC) headquarters failed to recognize the outbreak. 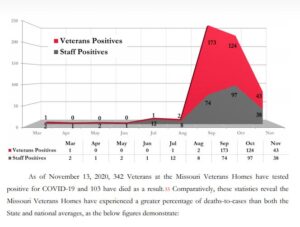 Armstrong Teasdale’s 53-page report says MVC should have recognized the presence of an outbreak in the veterans home in southeast Missouri’s Cape Girardeau by September 2.

MVC Chairman Tim Noonan says a tremendous amount of data was coming in.

“When the data was analyzed, there should have been a faster response to really recognize that the outbreak was growing in a way that ran faster than the protocols that we had in place,” Noonan says.

“The Veterans Commission should have anticipated an inevitability that the virus would get in (to the veterans homes), and if it did get in, how fast it could spread,” says Noonan.

Noonan tells Missourinet that this was a complex problem that overwhelmed very well-intended people.

The report notes that some veterans have roommates and share toilet and shower facilities. Armstrong Teasdale recommends that veterans reside in private rooms with private bathrooms, “to the extent possible.”

Armstrong Teasdale is also recommending that all Missouri veterans homes undergo a “COVID-19 reset,” meaning fundamental education regarding COVID and how to prevent its spread.

They also recommend that MVC consider retaining an occupational health nurse on headquarters staff, through the end of the pandemic. Another recommendation is making sure that veterans in the homes receive priority, when a safe vaccine becomes available.

“We’re going to take them all (recommendations) seriously and implement the ones that we think are going to have an impact,” Noonan says. “And definitely, staffing matters. Having the right talent, doing the right job matters.”

Noonan says MVC will drive the reforms that are needed. He also praises MVC staff, including its nurses and CNA’s, saying they have been working hard during the pandemic.

He says MVC’s job as leaders and managers must be to anticipate problems, just not fix them. He says the commission can do better in anticipating problems, in communicating and in making sure the staff has the resources that they need.

Another section of the report highlights the emotional toll the pandemic has taken on veterans living in Missouri veterans homes. Veterans currently cannot see family members, due to COVID concerns.

The report recommends that the homes establish a protocol to allow a limited number of designated family members to visit their loves one, saying it will provide veterans the contact they desperately need and will provide staff some relief.

“Some of the many ways in which family members are instrumental in their loved ones’ care include feeding or coaxing to eat, cleaning ears to help them hear better, helping them shower, providing passive range of motion, getting them out of bed, helping them turn in bed to prevent bedsores, trimming their eyebrows, brushing their teeth, dressing them and communicating with the medical team,” Armstrong Teasdale’s report reads, in part.

The report also says that it’s clear that MVC headquarters and homes staff genuinely care for the veterans. One family member told an investigator “They treated him (her veteran family member) like a hero.”