You are here: Home / Business / Schatz: Missouri Senate to return next week; two senators who tested positive for COVID have recovered (AUDIO)

The Missouri Senate leader says two state senators and a Senate staff member who tested positive for COVID-19 have recovered. 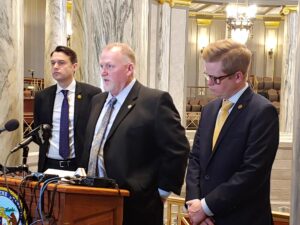 “I haven’t spoken to both of them (the two state senators who tested positive for COVID) but I’ve spoken with one of those senators and he has fully recovered and feeling fine. And I do believe the other senator according to reports, that he is fine also and fully recovered,” Schatz says.

Schatz and Senate Majority Leader Caleb Rowden, R-Columbia, announced last Monday that the Senate would postpone debate and votes on the proposed $1.2 billion supplemental budget until after the Thanksgiving holiday weekend, due to the positive COVID cases. Schatz says that decision was not made lightly and was done in the best interest of protecting senators, staff members and the public.

Pro Tem Schatz tells Missourinet that the Senate will return next Tuesday afternoon to debate and vote on the supplemental budget. He says the Senate needs two days to get it done, and that will include time for committee hearings.

“Our plan is we adjourned until 2 p.m. on Tuesday, December 1,” says Schatz. “So we are planning to come back and take up some of the appropriations work that the House has sent over to us.”

The House approved the supplemental budget on November 10, on a bipartisan 133-4 vote. The budget deploys federal resources across numerous state departments.

Schatz expects a final vote on the supplemental budget next Wednesday. If the Senate approves it as is, it would go straight to the governor’s desk. If any changes are made, the budget would go to a conference committee.