You are here: Home / Sports / Division-II conference in Missouri leading the way on the court and in the fight against COVID-19 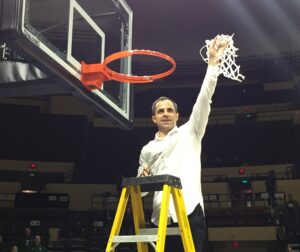 The MIAA Conference, which is home to five Division II schools here in Missouri, was the first conference in D-II or D-I in the country to start their basketball schedule. Thursday night they had their first games on the schedule and the conference is leading the way when it comes to protecting student-athletes.

The defending national champion Northwest Missouri State University’s men’s basketball season opener at Northeastern State University set for Thursday was postponed until Dec. 31 after the RiverHawks’s men’s basketball program had a number of positive COVID-19 cases causing the delay in the men’s game. Also, Missouri Southern Men’s Basketball Coach Jeff Boschee did not coach the Lions in their season opening game at Central Oklahoma after his wife tested positive for COVID-19.

However the MIAA Conference under the leadership of Commissioner Mike Racy has taken a unique approach to navigating through the safety protocols for it’s student-athletes.

Commissioner Racy joined me for a conversation and explains how the use of a daily app by student-athletes is helping schools get out in front of any potential COVID-19 positive results. Racy states the MIAA is the first and perhaps still the only full conference to work with the U.S Council on Athlete’s Health using this technology.