(NASCAR)—While many NASCAR fans have settled in to endure a winter before cars start running hot and fast at Daytona in February, 2021, some drivers are getting seat time in the cars of 2022.

The Next Gen car is going to be a much different driving experience than the present Generation 6 car.  Its independent rear suspension will bring a completely new handling experience to the car. So will the change to a wider, lower-profile 18-inch tire, which will replace the 15-inch wheel and tire.

Aero and downforce technologies also will change the car. The cars being tested has a redesigned side skit, aerodynamic vents in the hood and a new front splitter—all of which are intended to reduce the side forces of the cars. For the first time, NASCAR will race a car with a rear diffuser that should generate for downforce.

A carbon fiber tub that places the driver farther from the door panel will replace the body-on-frame construction NASCAR has been using.  A new transmission is in store—a limited sequential gearbox similar to those used on more modern cars.  Next year will be the last year for the BorgWarner four-speed that first appeared on the 1957 Corvette.

Pit stops will be different—and faster—because the new wheels will use a single center-locking lug nut of the kind used in INDYCAR and some other series.

The role of the gas man will change, too.  The new car is expected to use a clamp-on refueling hose similar to those used in IMSA and INDYCAR

The next time we see Clint Bowyer, who we made an adopted Missourian because he has a place at the Lake of the Ozarks, he’ll probably be all cleaned up and in a coat and tie in the FOX broadcast booth at Daytona just three months, launching his new career out of the cockpit. He was interviewed a few days ago by his son, Cash, who wanted to know if he could get along with one of his broadcasting partners, Jeff Gordon.  You might get a kick out of watching it from Clint’s Twitter page.

The man whose voice helped move NASCAR to the national sports state is fighting COVID-19. Ken Squier, who is 85, announced last Thursday on his radio station in Waterbury, Vermont, that he had tested positive.  His daughter later told an area newspaper he has not shown any symptoms.

He has been a member of the NASCAR Hall of Fame since 2018.

(FORMULA 1)—Hamilton, the non-musical, is at center stage for Formula 1, the sport’s second seven-time champion.  Lewis Hamilton, racing on a the Turkish Grand Prix track that he described during practice as like driving on ice, picked up his 94th career win, extending his record.

“Seven is just unimaginable but when you work with such a great group of people and you really trust each other, there is just no end to what can do together,” he said after climbing out of the cockpit of his Mercedes. “I feel like I’m only just getting started. It’s really weird.” 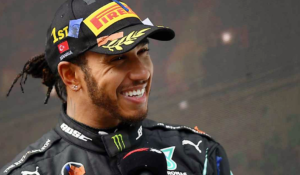 His seventh championship ties Michael Schumacher. Hamilton does not have a contract for next year but hopes to stay in F1 to chase an eighth title and to continue to work on behalf of racial equality, diversity, and the environment.  He is the only black driver in Formula 1.

Hamilton did not start well and was sixth after just five laps, more than 20 seconds out of the lead. A decision on when to change tires put him in contention. He stayed out on worn tires late in the race when others pitted and finished more than 31 seconds ahead of Sergio Perez and Sebastian Vettel.

Teammate Valtteri Bottas, the only driver with any chance to keep Hamilton from locking up another championship, had a miserable day, spinning five times and finishing 14th a lap down.

F1 still has three races to run this year. It has two races in Barain and then a race in Abu Dhabi that will wrap up the season in mid-December.

(INDYCAR)—One of INDYCAR’s most popular figure will be back on the circuit this year, driving a partial season for Meyer-Shank Racing. Helio Castroneves will run six races, including the Indianapolis 500, where he will be trying again to get his record-tying fourth victory. 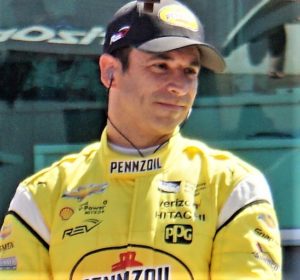 Castroneves, now 45, has been driving sports cars fulltime for Roger Penske, with one-off starts in INDYCAR at the 500 in the last three years.   Castroneves has started 351 INDYCAR races, fourth on the all-time list. He’s fourth with 50 poles and twelfth in victories with thirty. Although he never won the series championship, he finished second four times. The team also expects him to help its number one driver, Jack Harvey, mature in the sport. Harvey showed promise last year with an average starting position of 8.8, the fifth highest in the series—higher than champion Scott Dixon.