(NASCAR)—Before NASCAR launched its playoffs, it had a Championship Chase. For 2020, the Championship has gone to Chase—

Elliott, a few days short of his 25th birthday. The son of a former NASCAR Cup Champion finished his charge through the playoffs with an awesome run from the back of the pack to dominate the championship race at Phoenix.

Elliott, using the same number—9– on his car that his father, Bill (Awesome Bill from Dawsonville), used for his championship in 1988, started from the rear of the field after his car failed pre-race inspection. By the ninth lap he was in the top twenty and cracked the top ten after only 26 laps. He took the lead for the first time on the 120th lap at Phoenix, he had taken the lead. He led 154 of the 312 laps to finish with a three-second lead ahead of his three competitors for the title, former champions Brad Keselowski and Joey Logano, and Denny Hamlin. 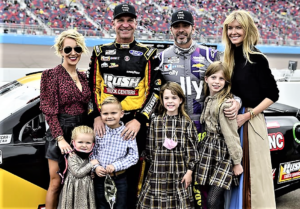 Seven-time champion Jimmie Johnson, an Elliott teammate at Hendrick Motorsports, finished fifth in his final race as a full-time NASCAR driver.  He plans to move to INDYCAR next year for road races. Two other drivers, 14th-place finisher Clint Bowyer (shown with his family and with Johnson and his family before the race) and 25th-place finisher Matt Kenseth, might have driven their last races, Bowyer definitely so as he’s moving to the FOX broadcasting booth next February. Kenseth came out of retirement to step into Kyle Larson’s car when Larson was booted out of NASCAR after five races for an ethnic insult of a fellow driver in an computer-simulated race during the pandemic-caused pause in the schedule in March.

Larson’s suspension has been lifted so he can return in 2021. He’ll become one of Elliott’s teammates at Hendrick.