(NASCAR)—It took four days and 34 races for defending NASCAR champion to win a race in 2020 and extend his streak of years with at least one victory to sixteen.  He is now only the sixth driver to win at least one race a year for sixteen years in a row.  He joins Ricky Rudd, Jimmie Johnson, and retired Missouri drive Rusty Wallace. Only David Pearson with 17 and Richard Petty with 18 have longer streaks. 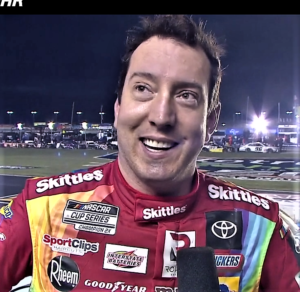 Busch nursed his dwindling fuel supply through the closing laps to beat Martin Truex, Jr., to the finish line by less than one-half second.  Truex had been forced to the back of the field at the start because inspectors found his car’s spoiler was illegal.  But by the time the race was stopped because of rain Sunday, he had climbed to fifth, and he led 53 of the race’s 334 laps at Texas Motor Speedway.

Rains kept the cars in their garages Monday and Tuesday. Engines didn’t fire until late Wednesday afternoon. NASCAR, which keeps track of such things, calculated the red flag period lasted 72 hours, 28 minutes, 34 seconds. That was not a record, however.

NASCAR red-flagged a race at Bristol on March 11, 1973 and did not finish the race until two weeks later.  Despite the interruption, Cale Yarborough led all 500 laps, setting the record for most laps led in a race.

Clint Bowyer, who was leading when the race was stopped Sunday on the 52nd lap led almost thirty more laps after the restart and slipped to 17th at the end.

Busch did not reach the semifinal round of eight and will not repeat as champion this year.

The series moves to the Martinsville short track next weekend where the championship field will be cut to four drivers who will race for the title at Phoenix.

Kevin Harvick, Denny Hamllin, and Brad Keselowski are in solid positions to be among the top four.  But Bowman, Chase Elliott, and former champion Joey Logano are separated by only one point in the competition for the four slot.  Truex is eleven points below the cutline. Kurt Busch is so far back that he needs to win next Sunday to make the final four.

Truex would be solidly in the hunt if it were not for penalties assessed by NASCAR for the pre-race discovery of the illegal spoiler.  In addition to the suspension of his crew chief and a fine of $35,000 for him, NASCAR took 20 standings points away from Truex.  If he had those points, he would be fourth going to Martinsville.

Suspended driver Kyle Larson has been cleared by NASCAR to return in 2021 and he has landed one of the best rides in the business.  He has signed a multi-year contract with Hendrick Motorsports, which is reactivating the number five for the car he will drive.  That’s the number Terry Labonte carried to his second Cup championship for Hendrick in 1996. There’s no word on who will sponsor Larson’s car next year. 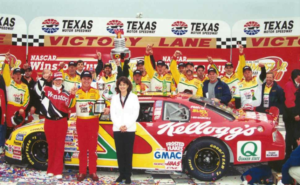 Larson was fired from Chip Ganassi Motorsports and suspended by NASCAR after he used a racial epithet to describe another driver during an irace (computer simulated NASCAR race) during NASCAR’s down time caused by the surge of coronavirus cases in March. Racing journalist Kyle Dalton reports Larson immediately went through NASCAR’s sensitivity training course and “sought advice and guidance from members of the Black community to better understand his words and the pain they caused, and what he could do to improve himself as a person.” 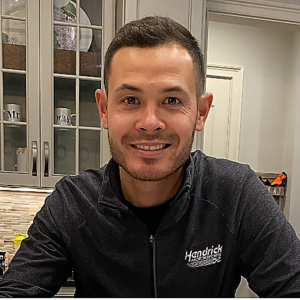 After meetings with fellow driver Bubba Wallace, the only African-American driver in Cup, pro golfer Harold Varner III, and Olympic legend Jackie Joyner-Kersee, among others, as well as a visit to the George Floyd memorial, he wrote a strong letter on his website saying, “For far too long, I was a part of a problem that’s much larger than me. I fully admit that losing my job and being publicly humiliated was how I came to understand this. But in the aftermath, I realized that my young kids will one day be old enough to learn about what their daddy said. I can’t go back and change it, but I can control what happens from here on out. I want them to know that words do matter. Apologizing for your mistakes matters. Accountability matters. Forgiveness matters. Treating others with respect matters. I will not stop listening and learning, but for me now, it’s about action – doing the right things, being a part of the solution and writing a new chapter that my children will be proud to read. People have taught me a lot over the last five months. The next time I’m in a classroom, I hope I can repay their kindness by sharing my story so others can learn from my mistakes. Making it a story I’m proud to tell is completely up to me.”

Larson, the son of a mixed-race couple, is 28, a six-time winner in Cup, a former rookie of the year in the series.

Previous Post: « (AUDIO) Missourinet 5 p.m. News for 10-28-2020
Next Post: Dozens of Missouri counties have purchased pens for each voter on Tuesday, because of COVID worries »