(INDYCAR)—Josef Newgarden, last year’s series champion, won the race but Scott Dixon won the INDYCAR championship in the topsy-turvy season.  St. Petersburg, where the first race of the season was cancelled last march became the last race of the year. Dixon had to finish ninth to nail down his sixth series championship if Newgarden won.  Pato O’Ward, one of the most exciting next generation of INDYCAR stars, finished second with Sebastian Bourdais, a four-time series champion, finishing fourth in his first run for Foyt Racing. 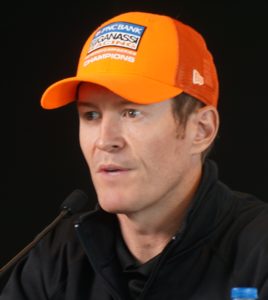 “Just have a smooth race, and that’s what we did. Credit to Josef, he drove a hell of a race there and put us under a lot of pressure,” Dixon said afterwards.

The championship is Dixon’s sixth. Only A. J. Foyt has seven.  Dixon is 40 and his relationship with owner Chip Ganassi, for whom he has won all of his titles, is solid for 2021.  And he’s not ruling out equaling Foyt’s total. “Six is good. Seven sounds better. That’s obviously going to be the goal. But it’s tough, as you can see from the competition, even if you mess up just a little bit.”

A seventh championship in one of the nation’s premier racing series not only would match Foyt in INDYCAR but would match Richard Petty, Dale Earnhardt, and Jimmie Johnson who won their championships in NASCAR.

(FORMULA 1)—Lewis Hamilton’s eighth win of the year makes him the winningest driver in Formula 1 History.  His victory at the Grand Prix of Portugal was the 92nd of his career, one more than Michael Shumacher.  It strengthens his chances of winning his Seventh F1 title, equaling Schumacher’s record.

Hamilton extended his record number of poles and finished almost thirty seconds ahead of Valtteri Bottas, his teammate.  Hamilton leads Bottas by 77 points in the standings.

(NASCAR)—NASCAR got through the first stage of its race at Texas before the rains came and washed out the rest of the day’s running.  The race will resume at 9 a.m. Monday with Clint Bowyer the leader after the first stage.

Championship contender Martin Truex, Jr., incurred a points penalty that is likely to be fatal to his changes of being one of the final four drivers to run for the championship. His car failed pre-race inspection and NASCAR confiscated the rear spoiler from his far. He was penalized twenty championship points.

Previous Post: « Tigers dominate Wildcats. Eli Drinkwitz “I’ve never been in a game like this.”
Next Post: Bob Priddy: election history this week as 5 statewide officials run for their jobs for the first time »