(NASCAR)—Joey Logano, NASCAR’s 2018 Cup Champion, is the first driver to lock up a chance to race for the championship in the final race of the year.  Logano withstood a furious challenge from Kevin Harvick for more than forty laps after the last round of pit stops and finished less than one-third of a second in front.

Harvick, the 2014 champion, led the most laps in the race but couldn’t get past Logano, who came out of the pits ahead of him for the last green-flag run to the end. The victory makes Logano the first of four drivers who will run for the title in the year’s last race, at Phoenix next month. Alex Bowman, Brad Keselowski and Kyle Busch—last year’s champion—rounded out the top give.

The weather was described as the coldest race in more than five years, with the thermometer reading well into the 40s when the green flag dropped 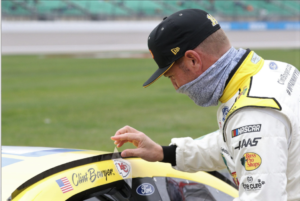 Clint Bowyer, (putting a Kansas City Chiefs decal on his car) who grew up about an hour south of the track finished 26th in his final run at the Kansas Speedway, which he considers his “home track” in NASCAR’s top series. Bowyer was inside the top ten when he got together with Matt DiBenedetto on a restart, causing him to drop to 14th.  Another incident on a restart damaged his car even more and led to a disappointing 26th-place finish. 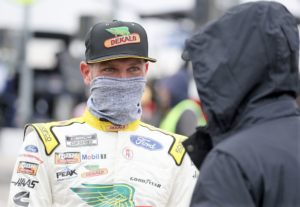 Bowyer felt he had a top-ten car until the restart incidents. “We just got some damage and had to pit,” he said. “I wanted to leave here with a really good finish.”  NASCAR and track officials let Bowyer lead the field around the track on one of the pace laps for a farewell wave to the limited number of fans allowed in the grandstands.

Three other drivers will join Logano in the championship race. Harvick, Keselowski, and Denny Hamlin are the three in contention after this race. Chase Elliott, Bowman, Martin Truex, Jr., and Kurt Busch are below the cutoff line. Busch, definitely, and Truex, likely, will need to win one of the two remaining semi-final races to qualify to run for the title.

The next race is next weekend at the Texas Motor Speedway.

(INDYCAR)—INDYCAR concludes what has arguably been its most challenging season next weekend at St. Petersburg. Five-time series champion Scott Dixon has to finish ninth to become champion again even if his closest competitor and the defending series champion, Josef Newgarden, scores maximum points.

The pandemic forced the series to rewrite its schedule to eliminate races on the west coast, move the Indianapolis 500 from May to late August, and to shift the season-opener at St. Petersburg, Florida to the last race on the schedule.

(Formula 1)—Formula 1 races next weekend  in Portugal. Lewis Hamilton will have his first chance to set a new F1 record for most victories. He’s tied with Michael Schumacher at 91.