Missouri’s governor says he acted immediately when he learned about the spike in COVID-19 deaths at veterans homes, ordering an external review. 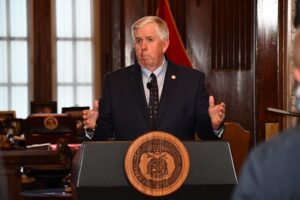 Governor Mike Parson made his comments during a Thursday press conference at the Statehouse in Jefferson City, in response to questions from Missourinet. He says the state was leading the nation in the way we were taking care of veterans in the veterans homes. He says they noticed a high spike in a few veterans homes, which raised red flags.

“We immediately, once we found that information out, we reached out to the (Missouri) Veterans Commission. We asked for an investigation. That investigation is taking place, or has taken place,” Parson says.

“We immediately sent in our box-in strategy,” says Governor Parson. “We put testing supplies in the veterans (homes) to a tune of about 3,000 that are out there now, trying to really take care of that situation. But it was unfortunate that it happened, it was definitely a red flag, the way it happened.”

The Veterans Commission has obtained additional staffing and resources from the federal government, to assist the Cape Girardeau and St. James homes.