You are here: Home / Sports / REPORT: MU-KU basketball won’t play each other this season 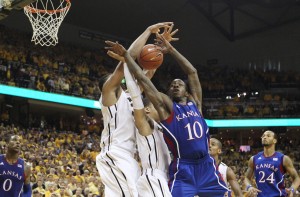 Missouri Tigers Steve Moore and Michael Dixon stop a shot by Kansas Jayhawks Tyshawn Taylor in the last minute of the game at the Mizzou Arena in Columbia, Missouri on February 4, 2012. Missouri won the game 74-71. UPI/Bill Greenblatt

The Kansas City Star is reporting this year’s Border War basketball series between Mizzou and Kansas will be put on hold for one year due to the COVID-19 pandemic. The game scheduled for December 12th in Kansas City will be moved to 2026. According to The Star, the six-game series will begin next season (2021-22) at Allen Fieldhouse in Lawrence.