(NASCAR)—Chase Elliott has won his fourth straight NASCAR road race, a convincing win on the Charlotte Roval, in a race that saw defending Cup champion Kyle Busch eliminated from the next round of the payoffs and saw Clint Bowyer’s long-shot hopes for the next round fade away.

Elliott passed Erik Jones with 27 laps to go and pulled away to a near-four-second margin over Joey Logano. Jones was third, Kurt Busch fourth and Ryan Blaney, who tied Elliott for most laps led in the race—27—was fifth.

The semi-final round of the playoffs begins next Sunday at the Kansas Speedway. Still in the running are Kevin Harvick, Denny Hamlin, Elliott, Martin Truex, Jr., Joey Logano, Brad Keselowski, Alex Bowman, and Kurt Busch.  Only Hamlin, Elliott, and Bowman have not won a Cup title.

Out of the running are Bowyer, teammate Aric Almirola, Kyle Busch, and Austin Dillon.

The next three races will determine the four drivers that will race for the championship in NASCAR’s final race of 2020.

Clint Bowyer rallied for tenth.  He ran strongly most of the race, led nine laps, and was in contention when late-race pit strategy didn’t work out and his car was damaged in a traffic jam on the infield road course, leaving him buried in the field without power steering for the last two hours of the race, and leaving him exhausted at the end. 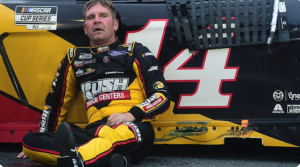 Bowyer will be taking his 25th and final shot at a victory at his “home track,” after announcing last week that he is retiring from Cup racing at the end of the year to become part of the FOX broadcasting team for the 2021 season.

In fact, none of the drivers who might have considered Kansas their “home track”—drivers from Missouri or Kansas—has ever won there since the track opened in 2001.  Jamie McMurray was winless there in 24 races. Carl Edwards ran nineteen times, Ken Schrader tried eight times and Rusty Wallace, who ran the first five years the track was open, never made it to victory lane either.

(FORMULA 1)—For the 91st time, Lewis Hamilton has won a Formula 1 race, significant because that ties him with Michael Schumacher for the most victories in F1 history.  Hamilton started second, next to teammate Valtteri Bottas but took the lead on the thirteenth lap. Bottas retired soon after with car trouble.  Hamilton finished a comfortable five seconds ahead of Red Bull’s Max Verstappen. The third podium spot went to Daniel Ricciardo, who gave Renault its first podium finish in nine years.

With six races to go, Hamilton leads Bottas by 69 points as he looks to tie Schumacher’s record of seven Formula 1 Championships.

(INDYCAR)—Indycar is idle until October 25th when it runs the final race of its season on the streets of St. Petersburg, Florida.  The points chase comes down to the final race of the season for the fifteenth straight year.  Two-time series champion—and defending champion—Josef Newgarden has an outside shot at winning the title from five-time champion and current points leader Scott Dixon.  But if Dixon finishes ninth or better, the championship will be his regardless of what Newgarden does.

Only A. J. Foyt has more championships.

It looks just like him.  The bust of this year’s Indianapolis 500 winner, Takuma Sato, that will appear in sterling silver on the Borg-Warner Trophy for as long as there is an Indianapolis 500.  Sato has sat for sculptor William Behrends for a second time. His face is on the trophy for his first victory, in 2017. 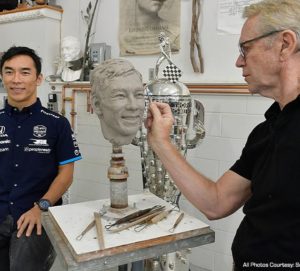 Behrends has created the trophy image of the winner’s face for each race since 1990. Although seven of the drivers he has sculpted have won the race more than once, he makes new images each time because drivers faces change.