“In 2021 my suit will no longer be fireproof,” he says in announcing that he will be stepping out of the cockpit and into the FOX broadcasting booth for next year’s racing season.

Bowyer is 41, pretty old as a competitive driver in NASCAR’s top racing series.  He’s had sixteen years in the top tier since his first race, for Richard Childress Racing, at Phoenix in 2005 when he started 25th in a field of 43 and finished 22nd.  The next year, he was in a Childress car fulltime. He’s finished in the top ten in the final standings five times. Bowyer was third in the final standings in 2007 behind Jimmie Johnson and Jeff Gordon. Five years later, in his first season with Michael Waltrip Racing, he was the runner-up to Brad Keselowski.

Bowyer, a native of Emporia, Kansas, cut his teeth on the midwest short tracks, some of them in Missouri and sometimes racing against a kid driver from Columbia named Carl Edwards. “I didn’t knw ‘what’s next,’ or where to go or how to get there,” he recalled this week. “Boom! Out of nowhere I got a callt hat literally set my life on a course that I could’ve never dreamed of. Richard Chidlress gave me an opportunity that led to racing cars on the greatest tracks in the country infront of a sea of fans for 16 years!”

He moved to Michael Waltrip Racing in 2012 and picked up the first three of his ten Cup victories.  When MWR folded, he spent a year with one of the back-marker teams before moving into Tony Stewart’s 14-car when Stewart retired. 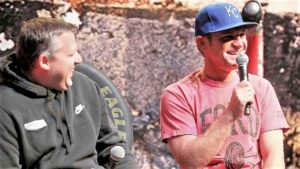 He has made the second round of the playoffs this year but needs to win tomorrow night on the Charlotte Roval to move to the round of eight.

After Edwards retired at the end of the 2016 season, we had only one Missouri driver still competing at the Cup level, Jamie McMurray.  At the 2017 Brickyard 400, we asked Bowyer, who has a vacation home at the Lake of the Ozarks, if we could adopt him as a Missouri driver, given his racing and personal connection to the state. 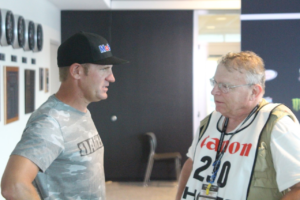 The gregarious Bowyer suggested we needed somebody other than McMurray to root for and readily accepted.

Missouri drivers (or adopted ones) have been important parts of top-level NASCAR racing for a long time:  The three Wallace brothers, Rusty, Kenny, and Mike, along with Ken Schrader, Edwards, and McMurray—and for the last four years, our adopted Bowyer. Only Rusty won a Cup championship although Edwards, in 2007, and Bowyer in 2008 won championships in what was then the Busch series.  Bowyer also won two all-star races at Charlotte (2014 and 2015) while Edwards won the race n 2011 and Rusty Wallace won it in 1989.

Bowyer joins McMurray with the FOX team broadcasting Cup races for the first half of the season next year.  He’ll be in the booth with Mike Joy and Jeff Gordon in the slot occupied for many years by Darrell Waltrip, who retired after the 2019 broadcast season.

His retirement opens another quality ride for the 2021 Cup year.  Hendrick Motorsports is moving Alex Bowman out of the 88-car into the 48 that Jimmie Johnson is leaving. Chip Ganassi Racing is looking for a driver for the 42-car that Matt Kenseth has come out of retirement to drive this year after the dismissal of Kyle Larson.  Richard Petty Motorsports is looking to replace Bubba Wallace in the 43; Wallace will drive for a new team backed by fellow driver Denny Hamlin and basketball star Michael Jordan.

As far as Bowyer leaving the fire suit we’re accustomed to seeing him wear behind—-well, he cleans up pretty good. That’s wife Lorra with him. They have two children, Cash and Presley. He says having them at the track each week “means everything to me.”

He has five races left in his career. After that, it’s Daytona next February.  In a new suit.

(Photo Credits:  NASCAR/Getty images except for Bob and Clint, by Jim Coleman)