(NASCAR)—Denny Hamlin survived a series of wrecks that used up several race cars to win the longest 500-mile race ever run at the Talladega Motor Speedway.  It took three overtimes before Hamlin finished 0.023 second ahead of Matt DiBenedetto with Erik Jones third. But the chaos of the race continued afterward. 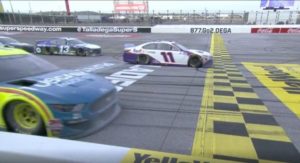 In what might have been a fitting conclusion to a race of such mechanical carnage and strange turns, NASCAR ruled that DiBenedetto had forced fourth-place finisher William Byron below the yellow inside track boundary line during the last lap and ordered his finish be listed behind the last car on the lead lap. A similar penalty was assessed against Chase Elliott, who led 41 laps and was contending for the lead at the end, because Elliott forced Hamlin below the yellow line.  DiBenedetto officially finished 21st and Elliott officially was 22nd.  The official winning margin of Hamlin over Erik Jones was 0.086 of a second.

Late Sunday night, NASCAR revised the finish again after reviewing the video of the final lap, again.  Officials ruled Chris Buescher, initially credited with sixth place, had forced Elliott below the yellow line,  Elliott was awarded fifth place and Buescher was dropped to 22nd, the last car on the lead lap.

The race was yellow-flagged thirteen times, ten times for crashes that involved 38 cars, some cars involved in more than one crash.   Two of the crashes were so large that the race was stopped for cleanup. Only 25 of the 39 starters will still running at the end of the race, including James Davison who was 82 laps behind the leader. 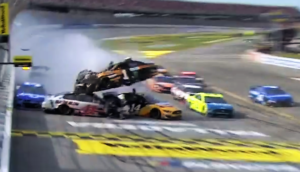 Clint Bowyer, hoping to improve his points position heading into the last race before the contending field is cut to eight drivers, helped start a ten-car crash that brought out the first red flag, finished 33rd and is now far below the elimination cut line. (That’s Bowyer’s 14 car running under the airborne Kurt Busch) When asked about next week’s race on the Charlotte Roval, he remarked that the only option for advancement is “must win.”

(INDYCAR)—INDYCAR’s difficult 2020 racing season comes down to the final race, October 25, in St. Petersburg, Florida.  INDYCAR was to have started its season there but the onset of the Coronavirus pandemic forced the series to scramble to fill out its season schedule of races.

Five-time champion Scott Dixon, who won the first four races of the year, has seen his 140-point lead shrink to just 32 points over Josef Newgarden.  Newgarden won the first race of weekend doubleheader at the Indianapolis Motor Speedway on Friday while Dixon struggled to finish ninth.  Newgarden could not repeat on Saturday, settling for fourth behind Will Power, Colton Herta, and Alexander Rossi, while Dixon finished eighth.

Dixon says the last few races have been “trying” as he has watched his lead dwindle. But he is still in a strong enough position that if he finishes eighth or better at St. Petersburg to become a six-time champion even if Newgarden scores the maximum number of points. If Dixon finishes eighth and Newgarden maxes out on points, they would be tied. But Dixon would be the champion because he has two second-place finishes this year and Newgarden has only one. Both will have won four races.

INDYCAR’s future looks more solid after this week’s announcement that Chevrolet and Honda have signed a new multi-year agreement to provide powerplants for the series.  The agreement brings stability to the end of the decade as INDYCAR switches to a new engine formula that will utilize hybrid technology with a new 2.4-liter engine.  The switch had been planned for 2022 but the COVID epidemic has pushed the new technology’s introduction to 2023.

INDYCAR continues to look for a third engine manufacturer.

(FORMULA 1)—Formula 1’s next race is the Grand Prix of Germany next weekend.