Missouri lawmakers will hear testimony at the Capitol this week from state education officials about how COVID dollars are being spent, and to hear supplemental budget requests. 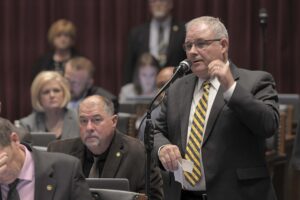 “I think with all the things going on now, at least the members that transfer from this legislative session to the next legislative session, it would be good to be caught up to date so we can hit the ground running a little bit better in January when we show up at the Capitol,” Black says.

“Looking at departmental requests for the (2022 fiscal year) 22 budget as well as any supplemental requests, any kind of a request they have for changes, more money, less money, in the budget,” says Black.

The northwest Missouri Republican says the committee will also hear details about how COVID dollars are being spent by educators.

“A lot of that money, people may not realize, went directly into students’ hands,” Black says. “It passed through places of higher education to go to students. Some of it of course was used in the universities, colleges around the state.”

Click here to listen to Brian Hauswirth’s full interview with State Rep. Rusty Black, R-Chillicothe, which was recorded on September 25, 2020: