(NASCAR)—Las Vegas-born and raised Kurt Busch finally got a win at his home track, thanks to pit strategy, some ferocious competition behind him in the closing laps, tough driving on restarts, and the ability to get the most out of his tires for the longest amount of time.

Busch has become the first driver to qualify for the round of eight competitors for the NASCAR Cup championship. Four drivers will be eliminated after two more races.

Busch held off Matt DiBenedetto, who was one of four drivers eliminated from the playoff last week  by less than a second. Danny Hamlin, hoping for a late-race successful charge on fresh tires, was third, instead.

Busch had been below the cut line for the next round going into the race. His win leaves Clint Bowyer, Aric Almirola, and Kyle Busch—last year’s champion—on the outside looking in. The younger Busch is nine below the cutoff line.  Bowyer’s 12th place finish leaves him twenty back and Almirola, who finished 17th, is now 27 back. Austin Dillon is behind by 32. 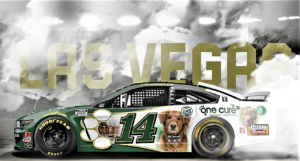 Bowyer ran well most of the night and was in the top ten in both of the first two stages of the race. But he faded out of the top ten late in the race.

A lot of things could change next week, however, when the drivers take their show to Talladega, the superspeedway where major crashes show no respect to a driver’s standings in the points. Bowyer has won twice at that track. He has crashed out of it five times.

He’s been close in several races this year, “so many times,” as he put it. He said afterward that it has been a “bit annoying” to keep coming close so many times.

He had some help from race stewards who forced Hamilton, the pole sitter, to take ten seconds of penalties for doing practice starts at unapproved places on the track.

Botttas, Hamilton, and the rest of Formula 1 don’t race again for two weeks.  Racing resumes at the Nurburgring, the eleventh race of the season.  Hamilton still leads the points standings but his 55-point lead over Bottas has been cut to eleven points.

(INDYCAR)—INDYCAR heads to its last three races with Scott Dixon 72 points up on Josef Newgarden.  Two of the races will be next Friday and Saturday on the Indianapolis Motor Speedway road course with the last race in late October in St. Petersburg, where the series was to have started the season had the coronavirus stayed away.

The series is raising some eyebrows with late-season driver changes as teams fight for post-season bonus money.  James Hinchcliffe is stepping into the Andretti Autosport car that had been driven by Zach Veach.  Team owner Michael Andretti says his company has to start looking at options for next year. Hinchcliffe has had a limited schedule—three events—this year and has been part of the NBC Sports broadcasting crew.

Helio Castroneves will have two chances next weekend to become a four-time winner at Indianapolis, just not a four-time winner of the 500. The three-time winner of the Indianapolis 500 is stepping into an Arrow-McLaren car that had been driven by Oliver Askew for next weekend’s double-header on the road course. Askew is out of the cockpit because of balance and coordination issues he reported after the Mid-Ohio race two weeks ago. He also took a hard lick when he crashed into the infield wall during the Indianapolis 500 on August 23. The INDYCAR medical team says he’s not fit to race until he finishes the “Return to Racing Protocol.”

The races will be the first at Indianapolis in a non-Penske car since 2000.  He has moved to Penske’s sports car operation and he and driving partner Ricky Taylor have won three straight IMSA SportsCar championship races.