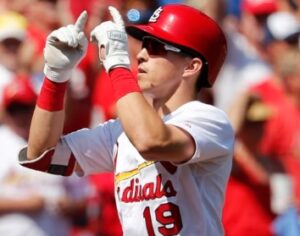 The Cardinals routed the Brewers 9-1 in the second game to earn a split in their doubleheader against Milwaukee in St. Louis.

Tommy Edman hit a two-run homer, while Dylan Carlson and Matt Wieters each drove in a pair.

Daniel Ponce de Leon threw six-innings of one-run ball to pick up his first win of the season.

Orlando Arcia broke up the shutout with a homer in the sixth. Josh Lindblom took the loss, falling to 2-and-4, giving up three runs in two-and-a-third.

In the first game, Christian Yelich homered as the Brewers beat the Cardinals 3-0.

Eric Sogard had a run-scoring single and Arcia had an RBI groundout in the second. Devin Williams picked up his fourth win in relief while Josh Hader nailed down his 12th save.

Paul Goldschmidt had his 13th double of the season, which was the only extra-base hit for St. Louis in the first game. Jack Flaherty took the loss to fall to 4-and-3.